Vacant of thought; absence of innovation 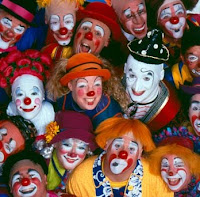 This editorial in the Globe and Mail could have been so much more. The opener was tantalizing enough but then it wanders off into a minefield.

Despite the best efforts of radical protesters aptly called thugs, G20 security accomplished its most critical task. Summit work was conducted without disruption for the participants. But the same can hardly be said of its impact on the rest of us. The major disruption caused to the economic life of Canada’s largest city, and the staggering cost of the summit to Canadians generally, raise serious questions about the future of such meetings, and invites serious reflection about how to host a G20 summit.

And that's about where the navel-gazing started and the lint-picking commenced.

There is no doubt that the "thugs" commanded too much attention - both on the streets of Toronto and inside the G20 meeting venue. The truth is, they attract each other. While both groups purport to be out to save the world, neither is capable of doing so.

The Black Bloc are neither right nor left politically and I don't believe for a second that they are true anarchists. Under brighter lights they are little more than behaviour challenged children throwing a violent tantrum without a shred of legitimate cause. They're attention junkies, which makes them little different from the horde of overblown egos meeting at the G20 summit.

The sheer scale of the G20 – so many leaders accompanied by so many large entourages – makes it virtually impossible to host at a resort in the way that the G8 has often been in the past. [...] The problem is there are very few places in the world outside of a major metropolis that can accommodate 10,000 delegates, 4,000 media, together with the security and ancillary hangers-on associated with a G20 summit.

And that's where the G&M went straight off the rails.

The G20 leaders and the thousands who accompany them, will tell you that they are out to save the world. Except that, in order to do that, they have to meet in palatial surroundings, couched in comfort and savour levels of luxury, all the better to make the meeting go smoothly.

Never mind that the meeting was hardly necessary in the first place. Most of what was done at the G20 had been agreed upon well ahead of the arrival of the first delegates. The final results were as shallow as the fake-lake and nothing was binding. Further, the decisions by this group may well send the world reeling. These are not the sharpest knives in the drawer.

That means the G20 will by necessity end up in large cities, a fertile environment for radicals, with plenty of support, places to hide and easy targets.

No... that means the authors didn't even think about how to do it differently. They also didn't acknowledge that holding a summit like G20 in a Northern Hemisphere city in June, after universities have ended their exam sessions, when the weather is good and the daylight hours are long, is just about as intelligent as taking a Guineau Pig for a walk through a pit of Boa Constrictors.

Unless the violence and heavy-handed security is something Harper intentionally manufactured. That's possible, but then Harper is another dull knife. He may be a master political manipulator but most of that is focused inward and serves to feed his over-sized ego. He only plays a long game if someone explains it to him first and Harper isn't much of a listener. He is, however, prone to impulsive, poorly thought-out behaviour and ideas as evidenced from things like the Alberta Firewall Letter, his addresses to American conservatives and his enraged response to the Chretien government's refusal to join the Bush/Cheney expedition to Iraq.

The police deserve praise for securing the summit site. Farther from the site, though, their success was less obvious. True there were no serious known injuries. True also the police showed too much restraint in dealing with the so-called Black Bloc, which ran amok.

The police showed too much restraint?! From any angle it is viewed, the police failed to protect people and property. And the coincidence of strategically placed, unattended police vehicles will continue to raise suspicion. It is not a stretch, at all, to suggest that the Toronto police, under orders from the ISU were running a strategy. They wanted that first rampage to happen. It gave them permission to behave through the remainder of the summit security exercise like Stalinist goons.

It’s important not to overstate what happened: too many windows were broken and cars destroyed, but the damage to property was neither massive nor widespread. Despite the mass police presence, Toronto did not become a “police state.”

Did the weekend at the lake without a radio or TV, did we? Police charged crowds who were doing nothing. They sent organized assaulters into peaceful gatherings of people. They threatened people who took photographs and videos. What's not "police state" about that? Not to mention the egregious secret law they felt happy to operate under.

But the lesson is clear. World leaders need to meet in sufficiently large but flexible groups to tackle big collective challenges – Skype is no substitute for face-to-face contact. And they must be able to undertake their deliberations securely.

Well, we finally agree, albeit only on one point. If they have to meet, and I still don't see the need to have to gather and thump chests like a bunch of old frat brothers out for a weekend at a high-priced sweat lodge, then doing so in a secure venue is required. A large city will never be a secure venue. At least not without trampling on the rights of its citizens and making a tacit declaration that the high and mighty, elected though they may be, will look down their noses at the revolting peasants. It is big brother wrote large.

This is the major conundrum: only major cities can host such gatherings, but future G20 meetings should not produce another Toronto, with its great security costs, massive disruption, and temporarily curtailed freedoms.

It is not a conundrum at all. It only remains so if things like the G20 continue in their present form.

This pack of bananas keep telling us they are out to save the world from... itself. They attach huge amounts of urgency and importance to the need for such summits. Only they and their huge "entourages" can do it.

Let's see how often G20 summits occur when the meeting is held in the hinterland; when the accommodations are a mixture of portable structures and tents; when the fine dining is replaced by camp food; when a large number of the toilets for the "entourage" are porta-potties and the communications is provided by military satellite links.

Let's see if these people are so intent on saving the world that they are willing to give up the opulence of their privileged existences to do so. We might find out exactly how many of these clowns were actually necessary for such a summit and how many were only here to waste their own and the host country's taxpayer dollars to attend a weekend summer party.
Posted by Dave at 14:50 Recommend this Post