Gulf coast residents had feared a tropical storm. Monday's weather wasn't that bad, but it was bad enough to bring relief efforts on the water to a halt. Seven miles out to sea there were rolling seven-foot seas. It makes the skimming operations to recover oil much more difficult. Monday's foul weather also forced BP to delay plans of adding a third capturing system which would help the "Q-4000" and "Discover Enterprise" recover some of the 60,000 barrels of oil that continues to spew into the Gulf daily. For the armada of boats dealing with the spill, tropical storm Alex is serving as a dress rehearsal of sorts for what is expected to be an intense hurricane season here on the gulf.

Alex is now passing north east of the ocean buoy in the Bay of Campeche. Pressure is dropping although the winds seem to be reasonably steady at around 30 knots. The storm itself has developed an eyewall. You can see the spiral rain bands forming. It looked briefly as though Alex was picking up some dry continental air, although the latest photo below indicates that it may be filling in. NHC reported that there was some entrainment* of dry air from the west. That may have the effect of limiting Alex's growth. 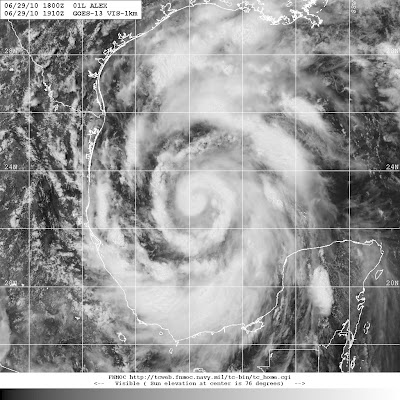 The webcams at Padre Island are starting to show the effects of Alex as it approaches.
Posted by Dave at 13:23 Recommend this Post