Alex spinning up, speeding up and heading for Texas 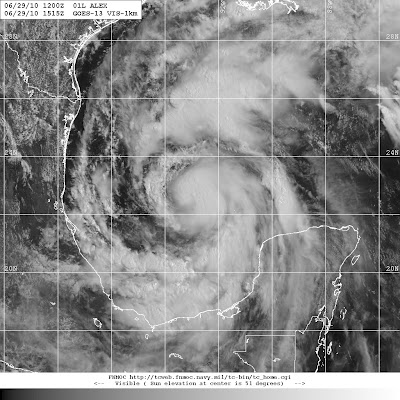 The US National Hurricane Center has now issued Hurricane Warnings on Tropical Storm Alex for the south coast of Texas and northeast coast of Mexico. Alex is gaining strength and will probably develop into a Hurricane by no later than tomorrow and make landfall on Wednesday night.

The wind shear is a little high but its forecast track takes it through decreasing shear in the next few hours. Sea surface temps are very high and the central pressure has dropped to 982 mb. It is moving North Northwest at 10 knots (12 mph/19 kmh).

As it stands now, Alex will have very little direct impact on the oil blowout in the Gulf of Mexico. However, given its track, intensity and radius, it will likely produce strong southerly winds and generate surface currents which will drive the surface oil slick onto the coast.

The big question now is how much damage this storm will cause. The expected storm surge could bring a rush of sea water inland of up to 3 meters above tide as Alex approaches and about a meter above tide over a wider area of the Texas/Mexico coast. There is some concern that the surge will reach the area of the oil slick, although it should be under a meter.

Coupled with all that is the fact that Alex, once it makes landfall is forecast to contain 80 knot (148 kmh/92 mph) winds gusting to 100 knots (185 kmh/115 mph) and will release huge amounts of moisture as it moves inland. 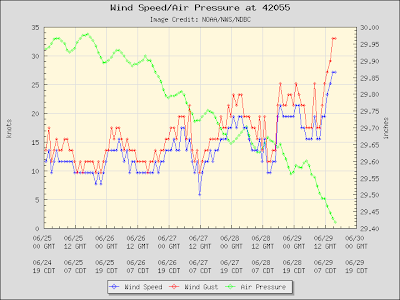 An interesting note. The ocean buoy centered in the Bay of Campeche is showing rapid and significant drop in atmospheric pressure and a rapid rise in wind. That particular buoy is almost directly in Alex's path. I'll be watching that buoy and I'll be checking out the webcams on South Padre Island.
Posted by Dave at 09:56 Recommend this Post