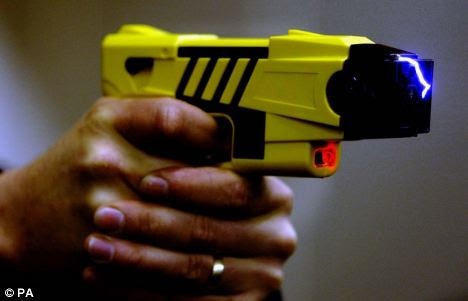 THE DAILY MAIL ONLINE has a report, well, ya gotta wonder — 'Don't taze my granny!' American police accused of using a Taser on an 86-year-old, bed-ridden grandmother. Really. And this was after asphyxiating the poor old woman.

Lonnie Tinsley called the emergency services to his home in El Reno, Oklahoma, when he became concerned that his grandma Lona Vernon had failed to take her medication.

But instead of a medical technician, he claims at least a dozen armed police officers answered his call.

In order to ensure 'officer safety', one of his men 'stepped on her oxygen hose until she began to suffer oxygen deprivation'.

Another of the officers then shot her with a taser, but the connection wasn’t solid.

A second fired his taser, 'striking her to the left of the midline of her upper chest, and applied high voltage, causing burns to her chest, extreme pain', and unconsciousness.