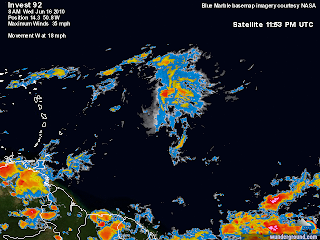 That... is Invest 92L. (click to enlarge) Luckily it weakened by late afternoon due to increasing wind shear. However, this is early in the season - very early. This little storm came close to reaching tropical depression status and both its formation and location have set off alarms in hurricane and cyclone warning centres around the Atlantic basin. As Dr. Jeff Masters says:

Quick non-technical primer.
Wind shear measurement is the strength of the upper horizontal winds. If wind shear is low it allows the depression to gain strength. If wind shear is high it takes the top off the rapidly rising air well before it reaches the tropopause and squelches storm development.
SST is sea surface temperature. High SST results in rapidly rising air creating a low pressure centre which, if conditions are suitable, can result in a rotating tropical depression.

There is a lot of debate over what will happen in the Gulf of Mexico if one of these little units develops, moves over the spreading oil and then makes landfall. Jeff Masters' prog on the subject is worth reading.

It's looking now like we're possibly going to find out sooner rather than later what will actually happen.