The tropical wave we have been watching in the Caribbean has evolved and gained enough energy to become the first named storm of the 2010 Atlantic hurricane season - Tropical Storm Alex. 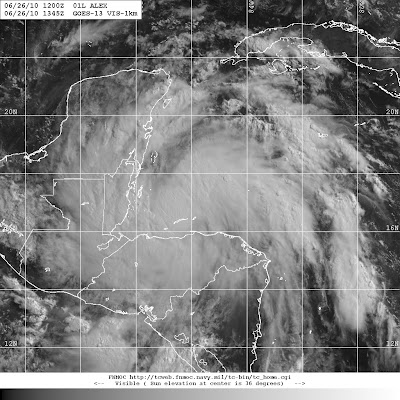 The direction this cyclone will take is still only a best guess at this time. There is considerable variance in the forecast guidance models although for the next 24 to 48 hours the estimate is that Alex will move in a general direction of West Northwest at about 9 knots (16.6 kmh/10.4 mph).

The wind shear over Alex remains low and the sea surface temperatures are very high. There is plenty of moisture and the storm is producing heavy rainfall which does not bode well for the estimated landfall areas of Honduras, Belize and the Yucatan peninsula.

What happens after Alex crosses the Yucatan is a big question. This storm is intensifying quickly and stands a good chance of emerging from the Yucatan landmass with enough energy to become a hurricane within the next 96 hours. Most forecasts are taking guidance which suggests that once Alex is in the Gulf of Mexico it will be influenced further westward making landfall somewhere around Tampico, Mexico.