First they came for KAIROS ... 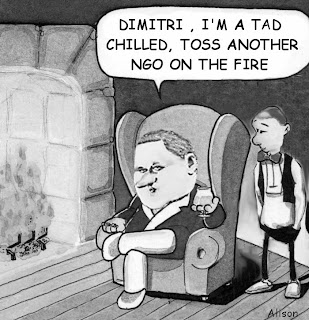 Gerald Caplan, G&M:
The Harper government, women’s rights and the cost of speaking out
The Tories are playing punishment politics with Canada’s progressive NGOs – and eroding civil society in the process

"Despite the chill on speaking out, this week the Canadian Council for International Co-operation announced its fear that its funding is likely to be cut. CCIC is Canada's preeminent coalition to end global poverty. Some 90 Canadian non-profit organizations, including most of the well-known ones, come together under the CCIC umbrella to monitor federal policies on foreign affairs, aid, trade and peace-building."

"Monitor federal policies on foreign affairs, aid, trade, and peace-building"?
Well there's your problem right there.
.
Betty Plewes, the former CEO of the Canadian Council for International Co-operation, was not afraid of speaking out in Embassy Mag in May :

"At Foreign Affairs, the past year has seen the entire division focused on women's rights and gender equality eliminated.

In Pakistan and Kenya, two countries where women's rights violations and violence against women are profound and systemic, CIDA has cut funds that were explicitly dedicated to gender equality. In Canada, Match International, the only international development organization devoted specifically to women's equality, has lost its funding.

Within CIDA, there is a noticeable retreat from gender equality work. Staff have recommended to NGOs that they remove the words "gender equality" from their proposal if they want a chance at funding."

This is what Senator Nancy Ruth was warning about when she recently advised NGO's to "Shut the fuck up" about abortion funding overseas. "If you push it, there will be more backlash," said Nancy Ruth.
.
Antonia Zerbisias covered much of this ground recently in Is Ottawa leaving women behind?, with a great quote that "the women's movement is the canary in the coal mine" :

"Canadians are snoozing while they are losing their country,” says [Liberal SWC critic Anita] Neville.“I don’t think people know or understand what’s going on.
I don’t think they will realize it until it hits them personally."

Yeah, that's how it usually is - women and children always go first.
Posted by Alison at 01:27 Recommend this Post