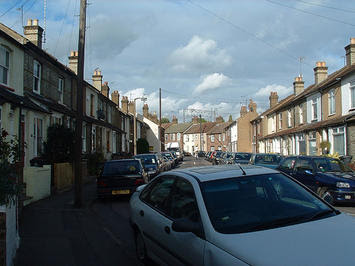 NEWGEOGRAPHY IS A SITE DEVOTED TO THE URBAN ENVIRONMENT, with an article by Joel Kotkin, "The Future of America's Working Class". However, it's about the problems of white, blue-collar England, and what they portend for North America. Worth the read.

As you walk through Watford, midday drinkers linger outside the One Bell pub near the center of town. Many of these might be considered "yobs," a term applied to youthful, largely white, working-class youths, many of whom work only occasionally or not at all. In the British press yobs are frequently linked to petty crime and violent behavior--including a recent stabbing outside another Watford pub, and soccer-related hooliganism.

In Britain alcoholism among the disaffected youth has reached epidemic proportions. Britain now suffers among the highest rates of alcohol consumption in the advanced industrial world, and unlike in most countries, boozing is on the upswing.

Tony Blair's "cool Britannia,"epitomized by hedge fund managers, Russian oligarchs and media stars, offered little to the working and middle classes. Despite its proletarian roots, New Labour, as London Mayor Boris Johnson acidly notes, has presided over that which has become the most socially immobile society in Europe.

This occurred despite a huge expansion of Britain's welfare state, which now accounts for nearly one-third of government spending. For one thing the expansion of the welfare state apparatus may have done more for high-skilled professionals, who ended up nearly twice as likely to benefit from public employment than the average worker. Nearly one-fifth of young people ages 16 to 24 were out of education, work or training in 1997; after a decade of economic growth that proportion remained the same.

Some people, such as The Times' Camilla Cavendish, even blame the expanding welfare state for helping to create an overlooked generation of "useless, jobless men--the social blight of our age." These males generally do not include immigrants, who by some estimates took more than 70% of the jobs created between 1997 and 2007 in the U.K.

Email ThisBlogThis!Share to TwitterShare to FacebookShare to Pinterest
Labels: economics