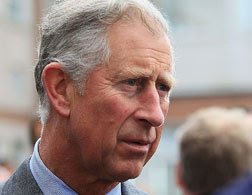 AND BOY, HITCH SURE IS STOKED. Seems Chuck prattled away recently at the Centre for Islamic Studies at Oxford U., and according to the Slate article, Chuck was rather disappointing.

So the speech made by Prince Charles at Oxford last week might bear a little scrutiny. Discussing one of his favorite topics, the "environment," he announced that the main problem arose from a "deep, inner crisis of the soul" and that the "de-souling" of humanity probably went back as far as Galileo. In his view, materialism and consumerism represented an imbalance, "where mechanistic thinking is so predominant," and which "goes back at least to Galileo's assertion that there is nothing in nature but quantity and motion." He described the scientific worldview as an affront to all the world's "sacred traditions."

One thinks of the painstaking, cloud-dispelling labor of British scientists from Isaac Newton to Joseph Priestley to Charles Darwin to Ernest Rutherford to Alan Turing and Francis Crick, much of it built upon the shoulders of Galileo and Copernicus, only to see it casually slandered by a moral and intellectual weakling from the usurping House of Hanover. An awful embarrassment awaits the British if they do not declare for a republic based on verifiable laws and principles, both political and scientific.

Chuck doesn't like science. Give 'im both barrels, Hitch.