UPDATE 252300Z: Apparently I had no sooner posted the information below and the NHC upgraded Invest 93L to a Tropical Depression (labelled TD1). Further, they are now projecting this system surviving a transit of the Yucatan and reaching into the Gulf of Mexico with Tropical Storm strength. The projected cone if influence provided by NHC through to Wednesday.

A little update from this past Monday. Remember Invest 93L, that disorganized bunch of clouds in the Caribbean that had all the right conditions to become a cyclone?

Well, here it is now. 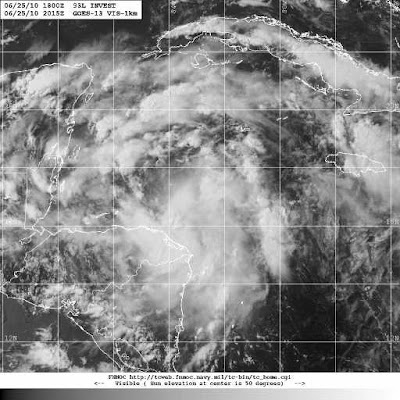 4. Landmass to interfere with development - too far away.

The US National Hurricane Center is now saying this one has an 80 percent chance of developing into a Tropical Depression and becoming a cyclone. I think may already be there. The latest readings of ocean buoys all through the Caribbean say this system is already at the depression stage.

Well, if it keeps tracking WNW it will make landfall over the Yucatan peninsula and likely weaken. I doubt if there is enough energy in it to pop out into the Pacific with any force. However, on the way through it will carry huge amounts of moisture and it puts Central America in peril of flooding.

The likelihood of this system finding its way to the Gulf of Mexico and over the mess created by the BP well blow-out, is very slim. Although, it depends on how quickly and with what force it spins up.

Once this one finishes its performance, there's always Invest 94L well to the East to watch closely, although there is currently only a low probability of development.