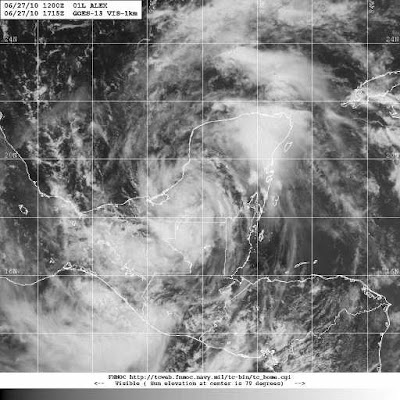 Tropical Storm Alex made landfall at just after 2300 GMT yesterday. The movement slowed slightly and, as expected the storm lost intensity. It has been downgraded to a Tropical Depression for the time being. It dropped large quantities of moisture on Belize and the surrounding environs.

A good description of the passing of Alex through coastal Belize is provided by the Cay Caulker website where the writer describes the rapidly changing weather. 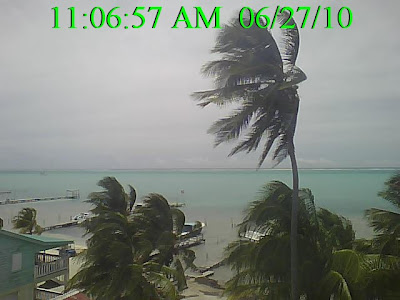 Alex will soon leave the Yucatan behind and enter the Gulf of Mexico. What happens after that is currently a guess. The high sea surface temperatures and low wind shear will give Alex renewed energy and reintensification to Tropical Storm status and possibly into a hurricane. Everything now depends on how much the storm slows once over water and how long it stays there.

Right now there is a ridge of high pressure north of Alex which would have the effect of causing the storm to alter to the west and make an eventual landfall on Mexico's east coast. A good number of computer models are providing that forecast guidance, however, there are some models and model ensembles which have the ridge weakening enough to cause Alex to recurve poleward and toward the northern reaches of the Gulf of Mexico.

At this point a high confidence forecast is going to require a later-in-the-day model run with more atmospheric data. That underscores another point of contention.

On at least two U.S. television stations the personalities reading and pointing at the weather conditions made statements to the effect that Alex had made landfall well to the south of the Gulf of Mexico and that all danger of the storm becoming involved with the oil blowout in the Gulf had now passed. Nothing could be further from the truth.

A majority of tropical storms which make landfall on the Yucatan survive and continue to present a threat with a large percentage of them strengthening to hurricanes. As the US National Hurricane Center states in its forecast discussion:

ALL OF THE MODEL UNCERTAINTY WITH THE TRACK OF ALEX OFFERS A
REMINDER TO NOT TO FOCUS ON THE EXACT FORECAST TRACK...PARTICULARLY
IN THE EXTENDED PART OF THE FORECAST PERIOD...WHERE AVERAGE
FORECAST ERRORS CAN BE 200 TO 300 MILES.

I suspect the forecaster at NHC added that statement to the discussion because of the unsubstantiated conclusions being reached by US media broadcast personalities.

Alex remains a danger and at present we have no conclusive idea as to where it will end up.
Posted by Dave at 11:29 Recommend this Post