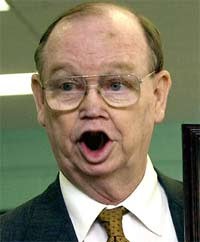 LIFE ISN'T VERY EASY FOR Donald E. Wildmon, aka the "wildman" of Christian fascist theology. Donnie's the Founder and Chairman of the American Family Association. This week, they have a wedgie about Home Depot. It apppears that Donnie's tighty-whities are hammering his hemorrhoids over "Home Depot exposes children to homosexuality in celebrated style". At least, that's what his hysterical site proclaims.

According to the 2010 Southern Maine Pride website, Home Depot signed on as a major sponsor of its 2010 Gay Pride event. But simply financing the event wasn't enough for the big box chain.

Home Depot also signed on as a vendor, conducting kid's craft workshops for children in the midst of loud and boisterous gay activities.

"loud and boisterous gay activities" — oh my! "celebrated style" — to the barricades! The Republic is in danger!

You can find out more about Donnie on Alex Constantine's Anti-Fascist Encyclopedia and Christian Fascist homophobia on Box Turtle Bulletin.