TASER International is outraged! OUTRAGED, I tell you! 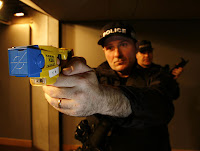 TASER International has issued a press release in which they describe the actions they propose to take after the "irresponsible" press coverage received when one of their devices was clearly seen to be involved in an incident which resulted in the death of Robert Dziekanski. Some highlights:

This tragic incident appears to follow the pattern of many in-custody deaths or deaths following a confrontation with police. Historically, medical science and forensic analysis has shown that these deaths are attributable to other factors and not the low-energy electrical discharge of the TASER(r). Specifically in Canada, while previous incidents were widely reported in the media as 'TASER deaths,' the role of the TASER device has been cleared in every case to date -- including the widely publicized Bagnell in-custody death in Vancouver where the TASER device was cleared by an inquest jury.

That's nice. No such medical finding has been reached in this case so the statement to this point is non sequitur. TASER International does not know that their device was not responsible for the death of Robert Dziekansi, no more than I can know that it was. The history lesson they offer is pointless... and it appears flawed.

Depending on the model, TASER delivers a high voltage charge at 18 amps in 10 microsecond pulses at 10 pulses per second. While that cycle is less than the 60 Hz found in household alternating current, the amperage and voltage are exceedingly high. TASER is counting on the low cycle rate to prevent it becoming lethal. However, a person with any cardiac, respiratory or neurological disorder will succumb to less than 60 Hz due to an interruption of an already weakened system.

Further, the video clearly shows symptoms of excited delirium, a potentially fatal condition marked by symptoms of exhaustion and mania such as heavy breathing, profuse sweating, confusion, disorientation and violence toward inanimate objects.

I knew this one was coming. "Excited Delirium" is a law enforcement construct. The only time the "condition" shows up is when someone dies in police custody. It is never used in other institutions such as hospitals and psychiatric care facilities. In fact, the "condition" does not exist in the eyes of the medical community. If it did it would show up in this publication as a mental disorder or this publication as medical disorder. Go ahead and look. You won't find it. In fact, the Diagnostic and Statistical Manual of Mental Disorders would probably list it if there was any evidence to support its existence.

The overall driving force in the decision to include or exclude a potential diagnosis from the DSM is the availability of scientific data.

Which would suggest that there is insufficient or no scientific data to support the existence of excited delirium as a disorder causing death. TASER International is making an unqualified diagnosis of a condition that has no support from the medical community.

TASER International is transmitting over 60 legal demand letters requiring correction of these false and misleading headlines and will take other actions as appropriate. These unsubstantiated, false headlines mislead the public and could adversely influence public policy in ways which could place the lives of both law enforcement and the public at greater risk," concluded Tom Smith, Founder and Chairman of the Board of TASER International, Inc.

Gee Tom, now you're going to contribute to writer's cramp and carpal tunnel syndrome. Needlessly from the looks of it because you've already got a few "public policy" problems. It would seem this event and its global release comes right in the middle of a US Justice Department review of deaths involving TASERs and other stun weapons.

The U.S. Justice Department is reviewing the deaths of up to 180 people who died after law enforcement officers used stun guns or other electro-shock devices to subdue them.

"These deaths raise a question in our mind that should be examined," said Glenn Schmitt, acting director of the department's National Institute of Justice. He said the review will initially focus on 30 deaths, including one from two decades ago.

Most of the deaths occurred within the past four years, corresponding with the mass deployment of stun guns to police departments throughout the country. A number of departments have re-evaluated their use of the weapons because of the fatal incidents.

Now, before old Tom there starts to wail that this was brought about by the bad press TASERs are receiving because of the Dziekansi incident, understand that the US DOJ review was initiated in June 2006 and a report is expected in 2008. At the time the review was started, TASER International was named in 49 law suits alleging either wrongful death or personal injury. In fact, it was law enforcement agencies who asked DOJ to conduct the review after an increased number of deaths occurred when stun guns were employed.

No. That's not all. It seems that TASER International knows their weapons possess a lethal capacity.

Taser International, which makes weapons that fire up to 50,000 volts and are used to incapacitate a person, also said it would no longer claim in its consumer literature that its guns "left no lasting effects".

The voluntary concessions come after the attorney general of Arizona, where Taser is based, launched an investigation earlier this year into claims made by the firm about safety studies carried out on its products. It is among nearly two dozen states that have started action against Taser products in recent months.

And the kicker. (Emphasis mine)

Mr Smith also said that Taser uses the term "non-lethal" as defined by the US Department of Defence - which does not mean the weapon cannot cause death, but that it is not intended to be fatal.

Other changes include substituting the phrase "leave no lasting after-effects" to "are more effective and safer than other use-of-force options".

So TASER International used a US Department of Defense definition for a product in a non-military application. After being seriously harangued by various states, including the one their head office is lodged in, they admit that the weapon can cause death.

There is another little bit of information which should cause those who attend rallies, protest marches and other such events to take note. The tear gas used to disburse crowds is actually CS gas, an irritant. Although described as non-persistent, I can tell you from personal experience in training that it stays on your clothing and skin for some time. So this bit of British research could be something to keep in mind.

Government researchers have discovered that, if the suspect has been in contact with CS gas - a chemical irritant used to incapacitate - there is a 'serious risk' the person will catch fire when a taser is used. The flaw is particularly significant, police sources have told The Observer, because officers would normally be required to use CS gas to resolve a situation before employing a more extreme device such as a taser.

A Home Office investigation into the safety of 'less-lethal' weapons fired the taser at mannequins covered in CS gas. In two of seven tests, they caught fire. 'In both cases, the flames produced were severe and engulfed the entire top half of the mannequin,' says its report, 'Less Lethal Technologies - Initial Prioritisation and Evaluation'.

Isn't that special. Smith doesn't mention that anywhere on his website. And he certainly didn't mention it in the bullshit spewed out in his press release.