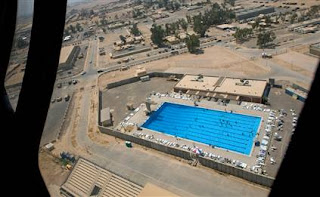 That we who viewed the US invasion of Iraq as something more than an O.J. Simpson hunt for something that could not be found have been right on every point? And the latest point scored by the dirty hippies?

Permanent US bases in Iraq.

TPM Muckraker has more, but here are the salient lines from the White House press release.

Iraq's leaders have asked for an enduring relationship with America, and we seek an enduring relationship with a democratic Iraq. We are ready to build that relationship in a sustainable way that protects our mutual interests, promotes regional stability, and requires fewer Coalition forces. In response, this Declaration is the first step in a three-step process that will normalize U.S.-Iraqi relations in a way which is consistent with Iraq's sovereignty and will help Iraq regain its rightful status in the international community – something both we and the Iraqis seek. The second step is the renewal of the Multinational Force-Iraq's Chapter VII United Nations mandate for a final year, followed by the third step, the negotiation of the detailed arrangements that will codify our bilateral relationship after the Chapter VII mandate expires.

In short, what that means is that Bush is going to scramble to get a new agreement in place before the UN Chapter VII mandate expires in December 2008, thus hobbling his successor with a permanent arrangement to provide US troops through a Status of Forces agreement with Iraq.

I know that language doesn't come out and say, "permanent bases" but this next part makes it pretty clear.

To support the Iraqi government in training, equipping, and arming the Iraqi Security Forces so they can provide security and stability to all Iraqis; support the Iraqi government in contributing to the international fight against terrorism by confronting terrorists such as Al-Qaeda, its affiliates, other terrorist groups, as well as all other outlaw groups, such as criminal remnants of the former regime; and to provide security assurances to the Iraqi Government to deter any external aggression and to ensure the integrity of Iraq's territory.

For more wholesome goodness head on over to Balloon Juice where John Cole contemplates moving beau-zeau Captain Ed (captaincy acquired from Star Trek colouring book) from the READ list to the MOCK list.

Ed doesn't seem to get it. You don't spend $1 billion in one year buying tents and plywood for four bases.

Photo: Jacob Silberberg/AP - The swimming pool of the 14 square mile US air base at Balad, Iraq.
Posted by Dave at 13:03 Recommend this Post