The Loftsmen of Britain want a tax break

You don't know what a Loftsman is, do you? Try a pigeon keeper. And they would like the Queen herself to declare their racing of pigeons a "sport".

Pigeon racers are petitioning the Queen to have their activity officially classified as a sport.

The Belford Racing Pigeon Club hopes the British monarch, the patron of the Royal Pigeon Racing Association, will intervene in a dispute that could see them pay millions of dollars in taxes, chairman Eric Sim said.

Racers, known as "pigeon fanciers," house their birds in sheds - buildings the British government now wants to tax, beginning in April. Sports clubs can get tax relief, but pigeon racing is not classified as a sport, which would leave racers footing a hefty tax bill.

Even if it's not officially classified a sport, "pigeon racing has been recognized as a sport for well over 100 years and this latest turn of events will cause many clubs to struggle to make ends meet," Sim said.

It's not like pigeon racing is (ahem) the sport of kings. It's an Andy Capp kind of sport.... sorry, hobby.

"During (the Second World War), owners gave more than a quarter of a million pigeons to our defence forces and they were used most effectively to carry messages from battlefronts and to save lives from sinking ships and downed aircraft," O'Connell said.

"It is little to ask the government to show some sympathy towards this group of people by reversing this latest decision and recognizing this activity is a sport."

Yes, indeed. In fact, Mr. O'Connell could have played a famous pigeon ace on this one. 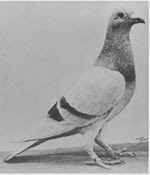 He was released from Arnhem, with a message fixed to his leg, at 1030 hours on 19th September 1944 and arrived at his loft in England at 1455 hours having flown over 250 miles. It was one of few messages to make its way back to UK. For his efforts he was awarded the Dicken Medal; the animals' Victoria Cross.

And William of Orange didn't rest on his laurels once his wartime service ended.

William was bred by Sir William Proctor Smith of Cheshire and trained by the Army Pigeon Service of the Royal Signals. After the war he bought him out of service for £185 and ten years later reported that, 'Although now retired, he is the grandfather of many outstanding racing pigeons'.

So, racing pigeons are the offspring of heroes. It would be fitting if the Queen saw fit to at least make them members of an official "sport". Or perhaps give them regimental status.

Photo: William of Orange. Hero of the Battle of Arnhem.