Voting is so... old world

The Reaction has discovered a truly stunning turn around in the 2008 US elections. It would seem that some of the most importanople in the upcoming election (That's relative. It is one year away.) have decided to drop out.

As Michael points out, this is truly stunning.

It amazes me. These are the descendants of the people that decided, for the sake of their liberty and freedom, with a rag-tag militia, to take on the super-power of the day. 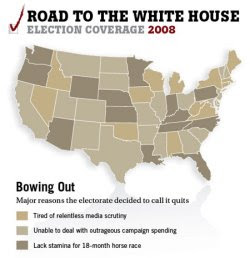 Yet, they allow some tin pot faux cowboy tear up everything they ever worked for and feed them fear for breakfast.

And they eat it.

I would ask, what ever happened to Don't Tread On Me?

I guess it was generational.
Posted by Dave at 22:12 Recommend this Post