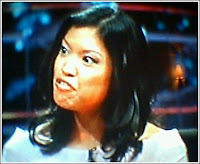 Michelle Malkin is seriously upset about this.

A British primary school teacher arrested in Sudan faces up to 40 lashes for blasphemy after letting her class of 7-year-olds name a teddy bear Muhammad.

Gillian Gibbons, a 54-year-old mother of two from Liverpool, was arrested at her lodgings at Khartoum's Unity High School yesterday, accused of insulting the Prophet of Islam.

Her colleagues said that they feared for her safety after reports that groups of young men had gathered outside the Khartoum police station where she was taken and were shouting death threats.

Outrage at this event is fully understandable. Fundamentalism runs amok once again. Hopefully the British can intervene quickly and get Gillian Gibbons out of Sudan.

Malkin, however, is hardly the appropriate spokesperson for outrage. I suspect that when it comes to spying on people and threatening them, she speaks more out of jealousy than indignation. Maybe she can file a fundamentalist copyright violation for stealing her M.O. with the Sudanese government.

Email ThisBlogThis!Share to TwitterShare to FacebookShare to Pinterest
Labels: malkin