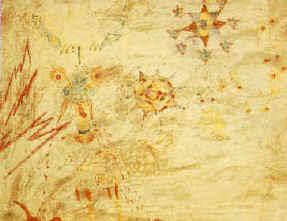 The last couple of days have involved repositioning, thus an absence from reading or contributing to blogs. Most news and information coming via satellite and after a struggle in determining to listen to NPR or the digitally remastered 1967 Sgt. Pepper's Lonely Hearts Club Band.

NPR won out after remembering that the eight-year old son of an Imperial Oil accountant had so long ago determined that The Beatles songs were all about drugs. If Dear Leader says it's so, it must be so. Lucy, so adeptly painted in the sky with diamonds, by a very young Julian Lennon at Heath House School, couldn't possibly be Lucy O’Donnell. If Steve says "Lucy" equals lysergic, how could we argue?

Interestingly, NPR was running a series of programs which were de-constructing several events which have come to form the fabric of American mythology, not the least of which is Thanksgiving. It would seem that the lot of the Plymouth settlers was not just a little rough, but a great majority of the reality of their lives and behaviour has simply been written out of history.

Yes, I know. It's all rather meaningless at this point, but in doing my catch-up reading I made a stop at Jon Swift (the 3rd funniest blog in the known universe) and discovered that Jon has a new idea that makes more sense. So, while Canadians have long since stuffed the big roasting pan back into the closet and Americans are wondering which weight-loss supplement to buy after last Thursday, the idea of changing the name of the American holiday has more than a little merit. After all, the Puritans who founded the US holiday would go on to ban Christmas. Luckily for them, Bill O'Reilly wasn't around then.

So, while I catch up, take a look at Jon Swift's idea, keeping in mind that there is at least one place in the world where the concept of "giving thanks to the United States" is actually a public holiday.

And to give you respite from my rambling, I tempt you with music. Go carefully, however. Steve may be watching.

Back to regular posting later on.

Graphic: Julian Lennon.
Posted by Dave at 11:33 Recommend this Post