MacKay gets a taste

When little Pete MacKay returns from his not-so-surprize visit to Afghanistan and starts to feed us the inevitable "Things are improving in Afghanistan" line we've come to expect from him and his crowd, we should remind him of this.

Canadian Defence Minister Peter MacKay had a narrow escape while visiting Afghanistan on Tuesday as rocket landed near him, spokesman Jay Paxton said.

He was visiting a forward operating base near Kandahar, when the rocket landed close to him and lightly wounded four Canadian soldiers, who are in good condition.

Canada has 2,500 troops in Afghanistan.

CBC television said that within minutes of the attack a Black Hawk helicopter evacuated MacKay to safety at the Kandahar air base. 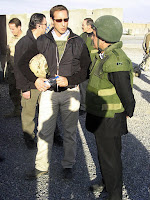 Why do I get the impression that things probably looked a little different than when this picture was taken of MacKay trying to look cool and being too stupid to know where the kevlar helmet goes?

And I'm figuring they had a stain to remove from the web seat of that helicopter.

H/T Buckdog
Posted by Dave at 12:53 Recommend this Post