What Bush was going to do to Osama bin Laden... 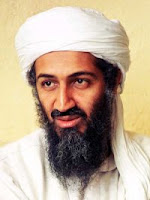 If he ever got around to catching him.

Uri Dan was a confidant of Sharon's. Despite being an "old breed" reporter who went to the direct point of contact for his stories, he was an unrepentant Sharon cheerleader. He was also very much a pessimist when it came to the chances of a peaceful resolution of the ongoing conflict between the Palestinians and Israelis. According to Dromi, Dan's book reveals little that wasn't already known about Sharon.

If you move down the review to a subheading entitled, somewhat punningly, In hindsight, you'll find this:

Speaking of George Bush, with whom Sharon developed a very close relationship, Uri Dan recalls that Sharon's delicacy made him reluctant to repeat what the president had told him when they discussed Osama bin Laden. Finally he relented. And here is what the leader of the Western world, valiant warrior in the battle of cultures, promised to do to bin Laden if he caught him: "I will screw him in the ass!"

It makes one wonder what the topic was in the weekly advice he was getting from Ted Haggart.

Such a revelation must be shattering to Lisa Schiffren, who went into an embarrassing sexual

meltdown on the pages of the Wall Street Journal. She only regained a modicum of control in the last paragraph when she opined that Laura alone would enjoy the contents of the cod-piece. I suppose now, Lisa will have to retire her mission-accomplished-landing picture for something of a lesser fantasy.

James Wolcott may well be saying, "I told you so."

It may even explain why he gave audience to the crowd that was trying to hide a known truth.

I wonder. Does Laura know?