Speaking of one of the most useless members of parliament in the country. (We were speaking about useless MPs weren't we?) Betty Hinton, Conservative member for Kamloops-Thompson-Cariboo seems to have promoted herself. And she's been called on it. (click on newpaper clipping to enlarge) 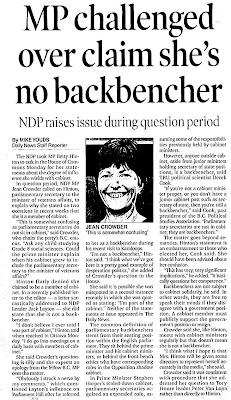 Well... it seems Betty has a really bad memory. As the Kamloops-Thompson-Cariboo Voters for Change point out, she did say she was a cabinet member.

As reported in Kamloops This Week (page 12) on February 11, Jack Layton's attempt to secure funding for the airport expansion has met with scorn and contempt from Betty Hinton. She brags: "I am a member of the governing party. I'm part of the cabinet (by the way, that's not true; if Betty had just checked Wikipedia, she would know that parliamentary secretaries are not Cabinet members). I have absolutely unfettered access to the ministers ... Mr. Layton has no influence, regardless of what he may feel." So let's get in this into perspective. Betty uses all her supposed influence to try to get the funding ... and, whether she's really trying or not, she fails. Then someone else tries, and she scorns him. Reporter Markus Ermisch reports that, when read Michael Crawford's statement that 's letter might "finally get results for ," Hinton "laughed for five seconds and said, 'that's my answer.'" Maybe it's funny for you, Betty, when you have your Member of Parliament's travel allowance. The rest of us, though, could really use some of those affordable WestJet flights we hear so much about.


Whoa! I don't like the way Jack Layton is employing his party's position in parliament but to say he has no influence? That's just insane. And, if little miss Betty is so influential why is she so constantly a strike-out when it comes to hot-button issues in the region?

Of course, Hinton isn't the only mouth-breathing clot warming one of the backbenches to come out of the region. Her neighbour in Okanagan-Shuswap is in strong competition for the position of most bestest jerk in the House.