The busy season is upon me and working six days a week (with a never-ending cold) does strange things to my poor, pitiful brain. In the spirit of spreading the insanity around, I decided it was time to inflict some of my pain on others. So here goes – a bizarre compilation of various little tidbits I’ve picked up over the last few weeks.

This story is a bit old, but…an unheard-of double helix nebula has been discovered in the Milky Way galaxy.

From the halls of "Even at this angle, I still say you're full of shit"
From Pharyngula. How to respond to complaints that the religious section of your newspaper isn’t paying enough attention to Christians? Well, if you’re the editor of the Columbus Dispatch, you take the complaint seriously, do the research to see if it’s a legitimate complaint, and then you respond:

A couple of critics wanted to know why we were wasting ink on these "false" beliefs when Christ is the only path to salvation. Another caller said he was tired of having "that Islam religion … shoved in my face."

To find out, I got a list of all the articles that have appeared on the cover of Faith & Values for the last two years and started tallying them. The results were surprising. The critics are wrong — we haven’t been slighting Christians — but I did find another shortcoming that I’d never suspected.

Although Faith & Values isn’t ignoring Christians, my tally does suggest that we are giving nonreligious people less attention than they deserve. We’re already taking steps to correct that.

Dear Ben Smith
Get over it.

In her first tour of Iowa last weekend, Sen. Hillary Rodham Clinton emerged as a candidate hard-edged enough to threaten violence, yet explicitly female enough to make women feel so comfortable that one mentioned menopause in front of crowd of more than 1,000 people.

There’s an old saying; War is God’s way of teaching Americans geography. Go to Canadian Cynic and watch this video.
Oh well, so much for that theory!
I Hate Valentine’s Day

I’ve always considered Valentine’s Day to be a capitalistic marketing scheme with all the mental/emotional health benefits of a McDonald’s deep-fried burger. So here are a few ways to combat this spectacularly stupid "holiday":
1. Firebomb all the Hallmark stores you can find
2. Instead of candlelight dinners (that blow the budget for the next 3 months) and boxes of chocolates (requiring some poor soul to quadruple their daily exercise routine to make up for the excess), take all that money wasted on roses, etc. and invest it in copious quantities of booze. And let the fun begin!

3. When you see a couple on Valentine’s Day holding hands, locking lips, and smugly acting like they’re the only people in the world who are capable of finding truuuuue love, go up the member of the opposite sex and scream “Why didn’t you call me!!!! You said that passionate night we had together wasn’t a one-night stand!!!!

4. Send roses to your office enemy, sign the card with the boss’s initials, and let the office rumour mill do the rest of the work.

The True Meaning of Love
If Dave really loves me, he’ll buy me this tax-season survival computer accessory 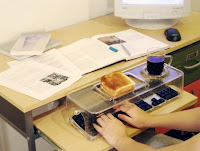 Dave says if I really love him, I’ll buy him this in return: 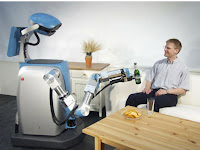 And Last but not Least
Philosophical musings from my little green book “ 96 Things a Woman should do in her Lifetime”
Tell Richard Simmons to just shut up and sit down.
Order a whole Peking duck when dining out alone.
Make wine from dandelions growing in your backyard and send a bottle of it to the CEO of Greener Chemical Lawns Inc.
Burn a CD with music you want played at your funeral. Baffle generations to come by including the rap song “I Like Big Butts”
Read James Joyce to telemarketers.
Posted by Cheryl at 14:30 Recommend this Post