Counterinsurgency, a lost cause and inkblots 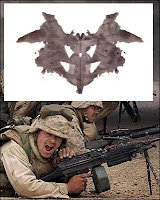 The counterinsurgencies in both Iraq and Afghanistan are not going quite as swimmingly as some would have us believe. The fact that Cheney and Bush can't even agree on when to speak with one voice on the matter demonstrates the level of confusion and an unwillingness to face the reality of the problem.

Over the past several months I have heard people referring to the "New Inkblot Strategy" in dealing with both the Iraq and the Afghanistan insurgencies. Interesting.

The "Inkblot" approach to warfare is actually a tactic. It involves troops moving into populated areas and staying there. It's not new and it should have been done, particularly in Afghanistan, years ago. In Iraq it may have worked had it been employed early on but in truth it's too little, too late.

While some are attaching great value to the "Inkblot" approach, a good many others believe the situation has changed so much, specifically in Iraq, that no tactic will prove effective. That doesn't stop some from talking it up as though the "Inkblot" approach is the greatest thing since sliced-bread.

Maj. Christopher Wendland, a senior staff officer for Dunham's brigade, said he thinks there's a good chance that by late 2007 American troops will have handed over most of Baghdad to Iraqi troops.

"I'm actually really positive," said Wendland, 35, of Chicago. "We have an Iraqi army that's actually capable of maintaining once we leave."

If the Iraqi army can control the violence, his thinking goes, economic and political progress will follow in the safest areas, accompanied by infrastructure improvement, then spread outward.

In counterinsurgency circles, that notion is commonly called the "inkblot" approach. It's been relatively successful in some isolated parts of Iraq, such as Tal Afar on the Syrian border, but in most areas it's failed to halt the bloodshed for any length of time.

It's here that I'll stop. You see, the good major is somewhat mistaken. When I read Tal Afar and the word "success" in the same sentence I was a little shocked. Tal Afar has been an unmitigated disaster. Despite the embedded reporters, most of the information about Tal Afar has been complete BS and the US military went to great lengths to cover up the reality of the place.

So, I will hand you over to Hope & Onions who has an absolutely brilliant post which takes apart the lies about, not just Tal Afar, but the whole disjointed surge plan and the confusion between the tactical requirements and the strategic demands.