Bushco's latest lipstick on a pig

It's worth a trip over to NewsHog to catch up on what's going on over the US claim that Iran is supporting the Shi'ia in Iraq. Specifically, he has a running post on the alleged Iranian weapons put on display by the US military in Iraq. (More on that further down).

There is also a post at NewsHog which picked up on a startling revelation that US Chairman of the Joint Chiefs of Staff was unaware of the Baghdad briefing and would not support the claim that the Iranian government was implicit in any form of weapons export to Iraqi militias.

General Pace said he was not aware of the Baghdad briefing, and that he could not, from his own knowledge, repeat the assertion made there that the elite Quds brigade of Iran's Republican Guard force is providing bomb-making kits to Iraqi Shiite insurgents.

"We know that the explosively formed projectiles are manufactured in Iran. What I would not say is that the Iranian government, per se [specifically], knows about this," he said. "It is clear that Iranians are involved, and it's clear that materials from Iran are involved, but I would not say by what I know that the Iranian government clearly knows or is complicit."

The CIA is also being very cautious, which suggests that the US commanders in Iraq have a very weak case. They may have Iranian made weapons but they have no real proof that the Iranian government is involved.

On February 2, National Security Adviser Stephen Hadley said the White House had sent back an earlier draft of the presentation. Indeed, while the specific intelligence on the explosive formed projectiles is no longer disputed in the intelligence community, the CIA is questioning whether their export from Iran represents a strategy of the regime or the rogue actions of one of its security services, known as the Quds Force. 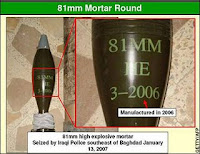 Back to the mortar rounds and other materials which formed the visual part of the briefing. There has been a lot of comment about the fact that the round is clearly marked in English. That would certainly arouse suspicion among even the mildest skeptic but a search of Iranian weapons producers does indeed show ammunition with English markings. Iran has long used English as a technical language. Most of their weapons prior to the overthrow of the Shah were from the US and the technology transfer was done using English. Notwithstanding, the fact that there are no Farsi markings on the weapons at all is a little surprizing.

In truth, the devices shown do not provide much in the way of conclusive evidence, and the English only markings give rise to a great deal of suspicion. One would think the organizers of this show would have at least tried to explain the reasons and background for the lack of Farsi markings. They didn't.

The BBC asks "Why Now?" It is, after all, rather convenient for the Bush administration as they rattle their swords and shift carrier strike groups into the Persian Gulf. It's worth reading the whole thing and this in particular caught my attention:

Against the inference that this all comes from Iran is the concept that Iraqis themselves would be capable of copying a design and therefore do not need to get bombs from Iran.

And there have been a number of news reports over the last year expressing scepticism, even among military personnel, about the link to Iran.

The Washington Post reported last October that British troops in the south doubted the claim.

A year ago, the London Times said that British officers in Basra had stopped making any such claim, saying only that the technology matched bomb-making found elsewhere in the Middle East, including Lebanon and Syria.

The timing is too convenient and the belief that the Iraqis, which Bushco only a few years ago accused of being so technologically advanced that they were on the brink of producing a nuclear weapon, are suddenly incapable of producing their own weapons is ludicrous.
This is all too familiar. The only thing missing is Colin Powell briefing the UN, although there is a powerpoint presentation and, as TPMmuckraker points out, has its own bits of missing information.
Posted by Dave at 15:06 Recommend this Post

Email ThisBlogThis!Share to TwitterShare to FacebookShare to Pinterest
Labels: iran