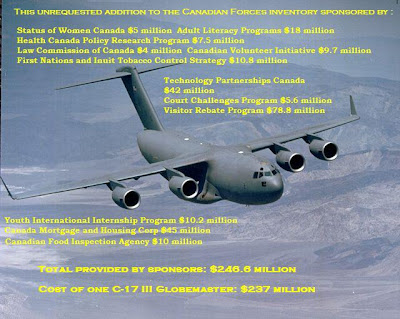 (Click on photo to enlarge)
The announcement by O'Connor, (former defence procurement lobbyist) and Fortier (who remains unelected) that Boeing has been awarded a multi-billion dollar contract to provide C-17 III Globemaster heavy-lift aircraft is hardly a surprize. That the pair have just piled ahead, against some significant opposition would be worth a medal if they were taking a hill. But they weren't. They were blowing money to make themselves and Harper feel good.

Even though the Chief of Defence Staff made it quite clear that strategic airlift was not a problem. Tactical airlift is lacking and our fleet of Hercules tactical lift aircraft have literally a few hours of life left in them, particularly the CC-130E model which is now exceeding 50,000 hours of service.

But hang on. There's more.

Last June Skylink Aviation Inc. offered the DND a $42 million annual contract to put four heavy lift, long range aircraft at the disposal of the Canadian Forces on a 24/7 basis, including basing them at CFB Trenton with 8 Wing. The aircraft being proposed would have given the CF an immediate capability with two of the aircraft being no less than the massive Antonov AN-124. There might have been a problem with the livery but I'm pretty sure Skylink, for an extra few thousand dollars, would have been happy to have thrown in a non-reflective grey paint job.

The Boeing C-17 Globemaster, according to the DND press release is coming in at $3.4 billion. That's going to shoot up quickly. The price of a C-17 to the US Air Force is $237 million per airplane, excluding spares and program costs. The truth is, the CF could have leased strategic lift aircraft, on a continuously ready basis, for 20 years and still not reach the advertised cost of four new C-17s.

Then there is the procurement method. Using an Advance Contract Award Notice, the Harper government literally shut-out all other possible bidders. Given that O'Connor probably has some pretty secure contacts at Boeing, that makes the whole deal a little smelly. Given that the CF was very much against this idea from the start, it gives O'Connor's headlong rush to get the C-17, and only the C-17, the look of something underhanded. He, after all, was the lobbyist and the whole process left the aircraft industry more than a little miffed and a little bewildered.

With respect to the competition, Canada's program used an "Advance Contract Award Notice (ACAN)," which permits the Government to identify an intended contract award recipient (in this case, Boeing for the C-17) based on its specifications and detailed market research. Industry is then invited to submit proposals that qualify, and proposals were submitted that included at least one offer of leased C-17s. All submissions were promptly disqualified for one reason or another, and despite complaints from some of the bidders, the Canadian DND pressed on with the course of action it had obviously intended from the start.

Which invariably translates into a bad deal, monetarily, for the taxpayer.

Too much of this adds up to something rotten. The lack of contract bidding, the rush by O'Connor, the rejection of other alternatives and the cost suggest someone is getting something juicy out of this and it isn't the taxpayer.
Posted by Dave at 21:45 Recommend this Post