What Donald Segretti says is very, very important. Rod Mickleburgh phoned the head Ratfucker of the Nixon Watergate scandal just to see how the Harper campaign robo-call affair all played out in his mind. Just to compare scandals, y'know. What Donald Segretti had to offer is not pretty.(My emphasis)


Mr. Segretti told me over the phone from his Orange County law office that he was appalled to learn robo-calls may have been used to provide misleading polling-station information to Canadian voters on election day.

“We never tried to do something that would, at the end of the day, take away the right of somebody to vote,” he said. “That goes beyond a prank. It’s just wrong, on many levels.”

Their dirty tricks campaign, Mr. Segretti claimed, was designed to disrupt the Democrats, not hoodwink voters.

Let's keep something in mind here. Donald Segretti was one element of a political machine. There were others of which he was not aware. That's pretty clear from the history we now know.

That was in the back of my mind as I was writing this post. It was something in Lawrence Martin's article which niggled at me.

My first thought was that it was just another attempt to deflect blame, but I had not let go of the idea that maybe this was a slip of information. While I didn't dismiss it completely, I wasn't sure that such a sophisticated mechanism was likely.

Then The Gazeteer, dropped a footnote on his post. He saw it too!

Was there a hit squad of Conservative campaign operatives pulling out all the stops in the swing ridings?

If so, they were not there to persuade or influence voters; they were there to eliminate opposition votes. That's a 21st Century version of a thug with a baseball bat outside a polling place.

So, yeah. The only way to resolve this is offered by Thwap. Because the Grey Lady of Canadian investigative reporting is repeating history. 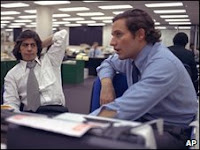 If there was a central 'swing team', who would have led it?


(I'll give my thoughts on that tomorrow...not hard to find if you are willing to go a googling...)

I know who led in 2008 Saanich-Gulf Islands. And I think he may have been a part of the national effort.

It's impossible to believe that all of this wasn't carefully coordinated.

Its almost enough to restore ones faith in Democracy, but in the end I expect Lucy Harper will snatch the football and that will be it until 2015. In 2015 once again democracy will be issue 302 on the voters radar.

Bruce Hallsor on CBC-BC on Tuesday, discussing deliberate vote suppression and election fraud under his watch in Saanich.

He only just heard about it the day before apparently.

From his Linkedin profile:

“Mr. Spiro is a “brilliant mind” who was a key adviser and top organizer on the federal Conservatives’ recent [2008] electoral successes. He focused on helping the Conservative Party win several of the swing ridings in the last election to increase their seat count in the House of Commons by 20 seats."

That's exactly who I would pick.

He also worked for Netanyahu:

Here's an overview by Kristen Shane of the Conservative war room last April. Spiro is mentioned at the bottom of page 1: