THE PRICE OF COCAINE HAS DROPPED 80% in the last 30 years! A sure sign of victory in the War On Drugs. According to Brian Palmer's article in SLATE, "More Blow for Your Dough: How did cocaine get so cheap?", the price of coke has dropped as the free market economy mimics Wal-Mart with economies of scale:

In their early days, even legendary drug kingpins like Pablo Escobar and the Ochoa brothers had to smuggle their cocaine out of the country in their own suitcases. With the surge in demand that began at the end of the 1970s, however, the kingpins built out their empires, modernizing processing, transport, and retail networks, and managed to lower prices by more than 60 percent over the next 10 years.

And the smugglers' submarines seem to work better than ours do. 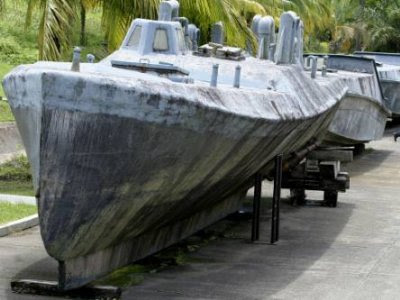 However, it is one more nail into the coffin of the delusional American Right-Wing mind-set. Finally, the South Americans have had enough of pandering to American delusions. That's what Nikolas Kozloff's article in ALJAZEERA, "The Summit of the Americas, WikiLeaks and the failed war on drugs", which gets right to the nitty-gritty:

Unhappy with the failed war on drugs, some Latin American leaders are calling for the decriminalisation of narcotics.

Guatemalan President Otto Pérez Molina, who is leading the charge, recently began openly advocating for decriminalisation of recreational drug use. Boldly, Pérez has labelled the war on drugs an abject failure and charges that the crusade costs Central American nations hundreds of millions of dollars every year, as well as the loss of tens of thousands of lives.

So, my guess is that this will be kept below the Gopper radar until after the American election in November, which Obama should win. Then I expect the South Americans to move on this and do a Portugal. The point is, should this come to pass, we may see the melt-down of the American conservatives as they have to face a public failure of a cherished delusion. Note to Canucks: Stevie ain't gonna like this.
Posted by Edstock at 06:35 Recommend this Post

Email ThisBlogThis!Share to TwitterShare to FacebookShare to Pinterest
Labels: War on Drugs fail

Therefore I love it twice as much as I already did!!!!!

Stevie Treason makes Fred and Barney (Flintstone and Rubble) seem thoroughly modern and progressive. It is difficult to believe that Steven Treason is so much younger than me, but has a mind trapped in a time earlier than my late grandmother who was born when the first 2 digits of the century were One and Eight!

The chuckleheads found in every office of any given government in North America just never seem to get this. The cons keep seeing endless re-runs of "Reefer Madness" in their ossified little minds while Barack O. says "I'm open to debate but my mind's made up and you'll never convince me otherwise." Haven't any of these clowns heard of Prohibition and how well THAT went? "Those who do not learn the lessons of history are doomed to be stupid." Meanwhile, Steevie Peevie and his psalm singers are practically apoplectic over the successful OnSite operations and want to pronounce anything stronger than Sarsaparilla a tool of the Devil. The various security/death merchants don't want this money pit/make work project to end either as it's been a Christmas gift that just keeps on giving from the tax payers to their bottom lines, and further entrenches the Security State/Siege Mentality that they so cherish. When are they/we ever gonna learn...?