The ballooning cost of the F-35 and MacKay's latest lie 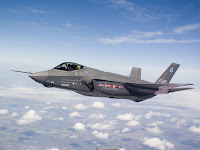 Yes, I will be producing part 3 of the F-35 series. It likely won't be available until tomorrow evening.

In the meantime, I cannot let this go by. Andrew Coyne is apparently working on the same project and coming up with roughly the same figures I have so far.


In fact it was reported nearly two years ago by The Globe and Mail, in the same June 11, 2010, story that first stamped what is now conceded to be an incomplete accounting on the public mind. Drawing on “secret cabinet documents,” the paper reported that the total cost of the as-yet-unannounced purchase of 65 jets was not $9-billion, as it had earlier reported, but $16-billion, once maintenance costs of $7-billion over 20 years were factored in. However, way at the bottom of the story there appears this note: “In addition, the government is predicting that the operating costs to fly the stealth fighters over two decades will reach $9.6-billion.”

There it was, all this time, hiding in plain sight. The Globe didn’t realize its significance, and neither did anyone else. It’s clear from the story that the number the government was working with internally was $26-billion. Yet $16-billion became the standard figure in public discussion.

Got that? On a cabinet document. That means that the figures were there in front of MacKay and Harper. That was pre-election, pre-signing of the MoU of 2010. In fact the numbers are higher than that as Coyne points out today and which I will clarify when I complete part 3.

As I pointed out previously, after MacKay was interviewed on Question Period yesterday, his claim that life cycle costs are not included in final purchase price is absolutely bogus. In fact, what he is suggesting was done is in direct violation of Treasury Board directives. Coyne makes the same mention in his article. In fact, here is the extract from the Treasury Board Guide to Management: (My emphasis in text)

Life-cycle materiel management is the effective and efficient management of assets from the identification of requirements to the disposal of the assets. Materiel management strategies must always consider the full life-cycle costs and benefits of the alternatives for meeting program requirements. By using life-cycle costing techniques, departments can evaluate the total costs to the Crown of owning or leasing an asset before it is acquired. This evaluation is accomplished by considering such factors as the current value of the costs of future operation, maintenance, and disposal, in addition to initial and ongoing capital costs. Estimating life-cycle costs also creates standards by which costs can be monitored and controlled after acquisition. By adopting this approach to the management of materiel, departments can ensure that their materiel management and asset management decisions are financially prudent and represent the best value to the Crown.

The extended life of materiel assets has important implications for decision makers. For instance, an acquisition decision that is based on the lowest purchase price but that ignores potential operations and maintenance (O&M) costs may result in higher overall costs. Decision making in life-cycle materiel management is an interactive process that considers all four phases of an asset's life cycle. Effective management requires that an appropriate level of management interest and control be maintained through all phases in the materiel asset's life cycle.

The four phases of life-cycle materiel management are as follows:

And there it is. There's even a "tip" for dummies. Take note of the 3rd phase of the LCMM and LCC.

Anyone who has ever been in the Canadian Armed Forces would look at that and ask, "What the ...?!!"

The F-18s are entering their 30th year of service. As it stands now those fighters will likely have to fly for at least another five years, and probably more. We do not dispose of fighters at 20 years. And with an 8000 hour estimated flying life, they will probably be operated for over 36 years.

There will be more coming on that in a later post. However, we should get back to Andrew Coyne's breakdown.


The life-cycle costs of an asset are those it incurs over the whole of its useful life. Yet Defence’s figures are based on an arbitrary 20-year interval, not on the F-35’s actual projected life. The Parliamentary Budget Officer assesses this at 30 years, while the Auditor-General prefers 36 years. Take the midpoint between the two. Prorate the department’s estimate of operating costs over 33 years rather than 20, and you get a figure of, not $16-billion, but at least $26-billion. Add in acquisition costs of at least $9-billion (and probably more like $10- or $11-billion — but that’s another story), plus the two- or three-billion more the Auditor-General says should be included for attrition, upgrades and the like, and you’re looking at a total cost, all in, of something closer to $40-billion.

Yes. That's roughly the same figure I have. And where did the 20 year LCC come from? Lockheed Martin.

Unfortunately the cognitive dissonance on the right will mean that this is nothing but a conspiracy by the usual suspects.
The facts are not factual and power must be retained at all costs, because it is a crusade.
I cannot believe that the name Conservative has been hi-jacked by a sociopathic, criminal class of ignoramuses.
I'm stunned that supporting the team regardless of their sins is now a marque of honour held in higher regard than honesty.

It's been a while now, but wasn't the last federal election due to the (Conservative) government being found in contempt of Parliament because they would not disclose the costing information on the F-35?

I haven't heard a single commentator ask this question:
WHO ARE WE GOING TO KILL WITH THESE
WEAPONS OF MASS DESTRUCTION?

Nice post. It's worth noting that the Harper Government - when touting the "industrial benefits" - found it convenient to tout a 40-year lifecycle:
"Our government’s investment in the F-35 fighter jet is expected to bring sustained employment to Canadian companies for the next 40 years."

There is plenty of information suggesting the F-35 isn't the invincible Fifth Gen world beater after all, not even close. What I'm reading leads me to believe it's more akin to Fifth Generation, Beta Version.

AviationWeek reports that 'several terabytes' of F-35 data and codes have already been filched by Chinese hackers.

Then we have the curious and rapidly buried account of how, just before Christmas, the Iranians managed to electronically commandeer a state of the art stealth drone, the Lockheed/USAF RQ-170, and bring it down for a safe landing within Iran.

You know that sort of drone is equipped with a highly sophisticated, supposedly super secure communications data link. How in hell did some Iranian get inside that system, overwhelm it, and take control of the drone to land it safely like a remote control toy?

That, in turn, ties in to the recent AviationWeek report that says 'several' potential adversary countries are creating cyber-weapons designed to exploit the electronics communication portals, emitters and sensors, not only on the F-35 but also its AWACS and Joint Stars command aircraft to implant malware into their onboard computers and systems.

It strikes me that this Fifth Generation business is nonsense. The technology is not remotely mature enough, secure enough or robust enough for countries like Canada to bet the farm on it.

The F-35 may be stealthy in a frontal aspect against X-band radars but it's also reported to have a huge heat signature and the SU-35S infrared sensor apparently has an 80km range.

I'm fast coming to the conclusion that the F-35 programme today is fueled as much as anything by the need to help Lockheed recover from the premature cancellation of the F-22. Lockheed is, of course, America's biggest defence contractor and might have a hard time recovering from a collapse of the F-35 programme.

So good topic really i like any post talking about Investment Plans but i want to say thing to u Investing not that only ... you can see in Investment Private Responses and more , you shall search in Google and Wikipedia about that .... thanks a gain ,,,