Making it up as they go along 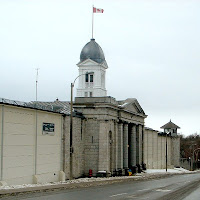 
This really is pathetic. Now the Harper government proves how far into the future they really look.


An award-winning program that helps rehabilitate prisoners and protect the public by keeping them from re-offending is falling victim to budget cuts.

The Lifeline program, which provides support for those serving life sentences and helps re-integrate those who are released on parole, has been operating in Canadian prisons for more than 20 years.

Rick Sauve, who spent 17 years behind bars and has been out for almost two decades, says he survived thanks to the program he now works for.

In other words, they don't. Sister Sage gives this a good slicing and dicing.

Further down the punishment road, Impolitical makes a clear point on the Harper government's inconsistency when making clemency pleas for Canadians facing the death penalty.

Failure to provide evidence of a consistent position reduces the impact of such a plea, regardless of the jurisdiction.

It's like these clowns watched one episode of Perry Mason, two episodes of Kojak and made up their minds during the commercials.

More: Harebell highlights how these morons digest information. Must read.
Posted by Dave at 05:55 Recommend this Post

Thanks for the link.

More throwing away of stats, data, and info because it just don't suit their agenda. Yikes!

Please stop interfering in the right of Corrections Corporation of America to maximize its profits, you filthy commie. Do you have any idea how many inmate days are lost when programmes such as "Lifeline" are successful? We rely on recidivism for our bottom line. While the 6 plants and out plan is likely to increase our first timer population, these are not yet the hardened criminals we like to run through our revolving door.

Please butt out of our business affairs.

This is reminiscent of the stupid move to kill the prison farms. Regressive doesn't even begin to describe the Harper Regime. Theirs is the politics of oppression.

I understand. If you were a Conservative you'd know how to make me disappear.