We've followed this thing from the 1997 entry into the F-35 development through to the Harper Conservative sign on to the 2006 JSF Production, Sustainment and Follow-on Development project.

At that point in late 2006 there was something else occupying the minds of many at NDHQ - Afghanistan. As the war in Afghanistan spun up, so did the problems. Canadian troops, usually in the point position in the Panjwai district were sorely in need of a greater level of support. There was a scramble to get Leopard C2 tanks into theatre along with better artillery. There was a line that moved all through the armed services: "If it isn't about Afghanistan, it isn't worth shit."


General Rick Hillier was making loud noises about helicopters. With no heavy lift helicopter capability Canadian troops were vulnerable as they moved over treacherous ground to complete patrols and sweeps, and to provide sufficient protection to provincial reconstruction teams. Another mad scramble took place and an advance contract award notice (ACAN) was issued for 15 Chinook medium/heavy lift helicopters.

That should have set off alarm bells. The Chinook contract was a mess from the start. Proper planning was sidestepped and statements of requirements were left wanting. Planners ignored the steps required in the DND Project Approval Guide, failed to submit life cycle estimates and, for all intents and purposes, cheated on their homework. Regulations by the dozen were violated. In short, what DND did was go to Boeing and told the supplier, "We'll take fifteen of those. Here, throw on these options", and then fudged the numbers by documenting the basic price of the helicopter without additions. The whole time, there was collusion between DND and PWGS in an attempt to short-circuit the acquisition process. The entire Options Analysis Phase of the project was literally tossed aside.

Earlier the Maritime Shipboard Helicopter project had encountered similar problems. While this was a more mature project and the SOR was reasonably well defined, life cycle costs and in-service support were left undone.

Neither of these projects would surface for the fiascos they were until then-auditor general Shiela Fraser made her report to Parliament in 2010.

The people in the F-35 shop were plugging away well under the radar. However, there was no doubt in the mind of anybody involved that the 2006 MoU was as good as saying the F-35 was a done deal and that would be the next combat aircraft in the RCAF inventory.

In 2008, still without a clear statement of requirements, there was a renewed look at the fighter aircraft on offer. Three were given a solid look: The F-18 Super Hornet; the Typhoon Eurofighter; and the as yet unproven, F-35. All three were compared to a matrix of mandatory performance factors for the next generation fighter. All three met the requirements, even though the F-35 was still under development.

The F-35, untested thought it was, was recommended as the replacement for the F-18s over the other two. The essential reasons given were that it was cheaper, newer, more advanced in the whole and would have a longer service life. None of those reasons were substantiated with any documentation, as the 2012 Auditor General's report lays out.

The RCAF and DND, for their part were convinced that they were in clover as far as the F-35 project went. They, with reasonable confidence, pursued acquisition as though the decision had been made. With the re-election of a Harper minority government in 2008 they felt that, even with the risk of a minority government, they could go for the hardware they wanted and would have little opposition, right up to cabinet level. They felt no need to suddenly start beavering away at a lengthy options analysis when, in their minds anyway, the decision was all but final. True, they had not documented everything required by department regulations, but they had not done it for other projects and these Conservatives didn't seem to mind. It was like Christmas. At least until Shiela Fraser blew the whistle on the two helicopter projects.

Still, as peculiar as the F-35 acquisition appeared, even to those involved in the RCAF, it was thought that the government had approved the way it was going.

On 16 July, 2010, the Harper government announced a soul-source contract with Lockheed Martin to supply 65 F-35A fighters for $16 billion.

That was a lie. There was no contract. But there was pressure from Lockheed Martin.

There was also the same MoU signed in 2006 and updated in December 2009 (considered the 2010 agreement). Despite any other committment, that is the primary document which had Canada tied to the F-35. And while Harper and MacKay were tossing out one set of numbers, the MoU displayed something different. 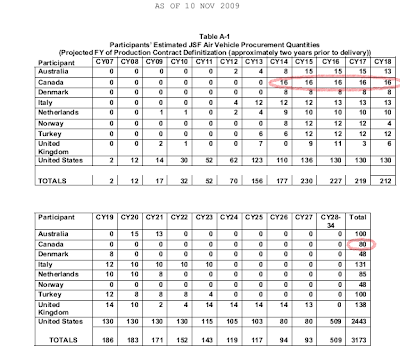 Canada was still estimating an 80 aircraft acquisition. It was dropped to 65 because of the increasing costs. Further, Canada's contribution to the development had remained the same despite increased development costs. Good deal. But the shrinking acquisition was problematic. A 20 percent slice off the numbers was not supported in any documentation.

And there was still no actual pricetag. At least not one available pubicly. Inside the JSF project office were lodged Canadian participants who had a pretty good reckoning of what the fly-away cost would be.

When Harper refused to provide details of the cost of the F-35 in 2010 there was good reason. The government had substantially low-balled the actual price, left out the life cycle costs and had no material management plan. He faced an election and continued to lie throughout the election campaign. In DND two camps had developed. The larger one was the F-35 adherents; the smaller faction believed a competition would result in competitors to the F-35 offering a much reduced price on the two other possible contenders. MacKay was in possession of that information when he joined in announcing the F-35 as a done deal.

In November 2011 the Standing Committee on Defence heard from another JSF program participant: Norway. Had MPs at that committee been doing anything except collecting a paycheque and building a hefty pension they would have got their calculators out and gone screaming down the corridors. Only one MP knew what questions to ask.

Rear-Admiral Arne Røksund, Head of the Department, Defence Policy and Long-Term Planning, Ministry of Defence of the Kingdom of Norway, offered some interesting information. NDP MP Christine Moore asked him:


I want to discuss the F-35 aircraft. You said your budget was realistic. What is your budget for procuring the F-35s?

Assuming the admiral was using the NATO standard that life cycle includes initial acquisition of the asset, at the higher number of aircraft that puts the cost of each aircraft at $769,230,769.23.

Norway's schedule for acquisition is virtually identical to Canada's. The cost to participants, according to the MoU and US law, is that each F-35 will be delivered at the same price at that Then Year to all participants. Ready?

Pricetag, based on the due diligence of the Norwegian Ministry of Defence, (which had life cycle costs readily available for a realistic 30 years), for 65 aircraft is exactly $50 billion.

So, $25 billion? And that includes life cycle costs? I think not.Try double that.

You know, I'm enough of a war-monger sadist to understand the way they bought the transport helicopters.

But there was really no "we need this yesterday! people are dying NOW!" pressure for replacing our fighter jets.

This amount of lying is just inexcusable.

And your point in the post? $50 billion instead of $25 billion? Well taken and not entirely surprised.

Somebody doesn't know how to add.

Economists are not accountants. And lying Steve is a failure at both.

a "soul-source contract"?
So the Cons sold their souls to Lockheed-Martin? Would explain a lot.