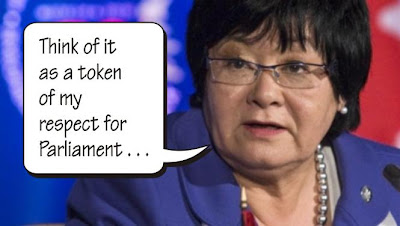 Much great stuff in QP today but one of my absolute faves was Romeo Saganash referring to Oda as the "Mimosa Minister"! Oh, I laughed!

Everyone got on the band wagon after the Parliament session. Dion, Mulcair, Biovin and many others, spilled the beans on Bev Oda's outrageous expenses, right back to her fist days as a minister. She has wasted enough of our tax dollars on her luxury's, to allow pensioners get their OAS at 65 yrs.

Harper and MacKay were raked over the coals about the F-35 jets costs. The Chair was furious, after two sessions, the Auditor hasn't been brought in to present his evidence. One of the ministers said, that wasn't true, and then the proverbial, really hit the fan.

Now Harper is trying to defend his, keeping our troops in Afghanistan. They will never be able to keep Afghanistan's from killing each other, with their tribal wars and ethnic cleansing. To me, the war was a total waste of time and money. Has there ever been a time, when there isn't one or other of the Arab country's, that, haven't been at war?