In the last post we were at a turning point in the F-35 project. On 6 July, 2006 the prototype F-35A rolled out of the hangar. On 7 July, 2006 it was officially named the Lightning II. It is worth noting that it was far from the aircraft that the project was working to develop. It was announced then that it would be a good two years before an optimized airframe would fly.

Nevertheless, in the precisely 5 months Harper had been prime minister, the first tangible F-35 was sitting there festooned with a Canadian flag, (among others). If you had walked into a WO/Sgts mess at any RCAF base they would have told you that you were looking at Canada's next fighter plane. If you went to an RCAF officers' mess, you would have gotten the same story.

At NDHQ, things weren't quite so certain. For one thing, the price tag was going to be huge. And by huge, I mean larger than any other military purchase - ever. The concern, reaching as far back as 2002, was whether the Canadian public could be convinced that there was a need for such a weapons platform.


Is  the  JSF  likely  to  replace  the  CF-18  after  2017?  It would  seem  to  be  the  most  obvious  choice  if one makes the following assumptions:
•      That  manned  fighters  continue  to  be  an  important asset in future air operations;
•      That the JSF survives the budget crunch coming in the US tactical air programme;
•      That the Air Force can justify a manned fighter aircraft in terms of capability planning;
•      That  enough  room  exists  within  the  CF  capital budget for what will be an extremely expensive programme; and, most importantly
•      That  the  Canadian  public  can  be  convinced  of the need.

In terms of the government, there were other fears. Although the Harper crowd had seemingly bought in, and General Hillier was standing firm on the project, the prospect of a change of government in less than two years was real, and the possibility was that it would be led by someone who didn't share the enthusiasm for military hardware as Harper did and Martin had done. The sting of the EH-101 Petrel cancellation, over a decade earlier, was still something felt by both senior RCAF officers and DND boffins. There was a concerted push on O'Connor, then defence minister, to keep his eye on the ball. The F-35 ball.

O'Connor was not the driest match in the box. He had some serious lobbyist/conflict baggage. He was ex-army, (which is always a liability in the MND chair), and there was some dissonant history between him and still serving officers. He too, had a short life expectancy. That never bodes well for equipment acquisition, especially when the deal is not really sealed. A change in MND could result in yet another "review" which would put everybody's pet project on the line - unless it was already in the hopper and close to the breech.

I can say, without reservation, that Lockheed Martin were very aware of everything above.

Five months after the F-35 roll out the partners in the F-35 development project were called to Washington, DC, to drink champagne, eat canapés, exchange cards and, oh yes, sign a new MoU. Bring your chequebook.


While participation in this next phase does not commit the Department to purchasing the multi-role aircraft, it is helping to define and evaluate DND's future requirements for the next generation of fighter aircraft to replace the CF-18 and its capabilities.

Soak that in. No commitment. But the rest is important too: helping to define and evaluate future requirements. In other words, if you don't do what the F-35 does, good, bad or otherwise, don't bring your airplane to the Gimli International Airshow.

Now, the definition of a 5th generation fighter is odd. In truth, there isn't one. There is dispute everywhere you look as to what constitutes a 5th gen fighter aircraft. But what happened in December 2006 is that DND committed to a project, with a lot more money, and, without any particular statement of requirements. They were relying on the project to show them what they needed.

The kids in the RCAF had no doubt. This was one sexy-looking piece of kit. They would LOVE to fly this pretty bird. That's why, under normal acquisition rules, they don't get to pick without adult supervision. Their cockpit view has nothing to do with national requirements.

The RCAF strategic plan in 2006 was Vectors 2020. Try to find it. However there is enough out there to suggest that one of the major requirements of any combat aircraft was the ability to go expeditionary, operate seamlessly with allies and, in keeping with the Harper demand for a parade, be able to operate out front with the bigger players. Strike.

What DND did do in 2006 was to dangerously hitch Canada's wagon to the American star. Part of that comes from history. Since the demise of the Avro Arrow, Canada's air force has flown US fighter/interceptors. The RCAF can, perhaps, be excused for failing to recognize changes in the world. But only for a minute. The RCAF is not staffed with idiots.

Remember that "no commitment"? Well, take a look at this. (Click to enlarge) 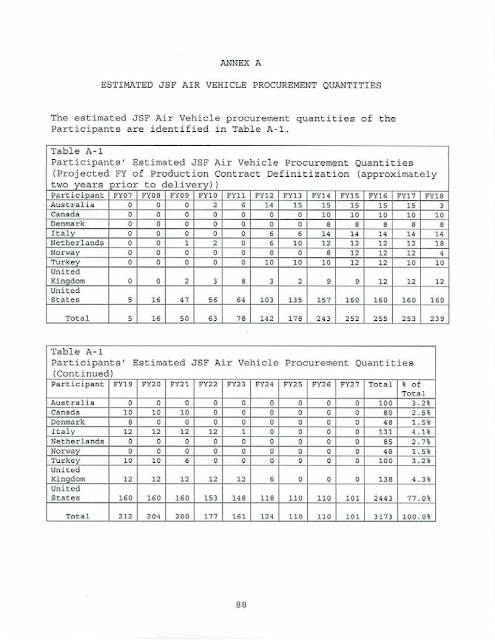 That is from the 2006 MoU estimating Canada's purchase of the F-35 JSF at 80 aircraft. This is the "no commitment". In order for the program to continue the prime contractor was relying on those countries to buy at least that number of airplanes. No matter how you slice it, Canada was in this. And we had given an estimate for the numbers we would buy if the F-35 turned out to be the aircraft we wanted it to be. And the only way we would know that was if the F-35 was fully developed. That way we would know whether there was anything else out there that was better than the F-35 and that would only happen if we weren't already committed to making this one helluva successful aircraft. Our commitment was based on the commercial success of a weapons system which relied on the commitments of the people who were developing it, regardless of their national requirements.

How do you resolve that conflict in requirements versus commitment? Make the F-35 the requirement.That's the next possible lie.

How do you do that? Pretend that the F-35 development project was based on requirements that you submitted.

But it wasn't. That's the lie.

The original F-35 project was exploratory. The advantage to Canada is that our aerospace industry was a proportional participant. The investment of Canadian tax dollars paid back well. It wasn't until Harper took the reins that we ended up in a commitment, without a clear statement of requirements, and without a competition.

No problem. Create a statement of requirements. Funny! The only aircraft that meets our SOR is the F-35 which helped us develop our SOR. The others? Generation 4.5. We want Generation 5, even if it isn't built yet.

Definition of Generation 5 fighter? F-35. How do we know? We're a part of the group defining it.

Geez Skipper, this is like watching The Fifth Estate, only, y'know, informative. When you went into the military, journalism lost a great muckrake. Kudos

Ummm. Check out a military rag called, The Lookout.

In the meantime, I'm ROFL, sort of.

The second, from Aviation Week, dealt with the US Navy's experience in shifting to Asian operations. They're finding some heavy duty cyberwar threats. Apparently the AESA radar arrays and other sensors make perfect windows for malware to enter the F-35's systems. There was also a reference to hackers, believed to be Chinese, having already managed to steal thousands of lines of F-35 software codes.