Jebus H. on a popsicle stick, take a read of this fool:

That also goes for ordinary citizens concerned about projects like the Northern Gateway pipeline but who don’t live or work near the project, he said.

Oliver was defending his government’s plan unveiled a day earlier to “strengthen environmental protection” by limiting participation to members of the public who are “directly affected” by major projects.

“We don’t see the need” to allow testimony from Canadians outside the project areas, or from environmental groups without specific expertise, Oliver said in an interview.

So what Oliver is actually saying is that you, citizen, because you don't live directly in the path of the right-of-way falling machines and the bulldozers, have less say on the Northern Gateway tar moving project than the Chinese investors.

“We’re not telling the NEB what to say, we’re not influencing their decision. They will come their decision independently, objectively, based on science. Then we will draw conclusions from it.”

Oh good. Now they're tossing out a "science" line. That's rich coming from a bunch of clots who regularly reject science when it doesn't suit their ideology.


“We’re not undermining the integrity of the process.”

He's right there. They're destroying it.

These guys are intent on laying waste to British Columbia. It's time government of BC took a stand. British Columbia has little to gain from this project. Alberta has dabbled with the idea of sharing infinitesimal amounts of petroleum royalties with BC in exchange for support.

I have a better idea. Get the legislation in place now. What's the most effective means a government has of altering behaviour? Taxes. 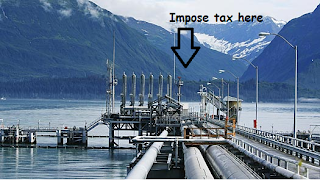 Impose a Bitumen Transfer Tax on all terminal transfer points in the province. Make it worth everyones' while. The equivalent of what Alberta takes in royalties is a good place to start. Make every drop of diluted bitumen pay back to the citizens of BC exactly what Alberta is stuffing in their coffers.

Hit 'em where they'll notice. Right in the profit margin.

There's no chance in hell that Crusty Clark will oppose the feds on this. That pretty much guarantees that she'd toast come the next election.

Outrageous were living in a fucking fascist autocratic dictatorship and the grim ruler the Crime Minister believes that the world was created exactly 3000 years ago and was given to man to do whatever he pleases.

Back to the darkest most repugnant days of humanity and worse than the middle ages, we are seeing the same type of religious zealot persecution of science as well as the rights and freedoms we have been gaining since the Magna Carta unfucking believable.

It's all about destroying the opposition -- all opposition to anything.

"Impose a Bitumen Transfer Tax" — BRILLIANT!!!!! And isn't there a BC election in 12 months? A new government could do that.

Brilliant solution, but the liberals are not dead yet.

See the article by Elizabeth MAy about a smear on Forest Ethics from the PMO:

What's not very surprising is the lack of reporting on what's the word on the rez.
I've heard estimates of up to thousands of First Nations out of Vancouver alone are ready to invade the north of BC in opposition to the pipeline.
The Canadian government might be thinking money, but First Nations are thinking Oka. This is fast radicalizing First Nations.

Where is Lee Harvey Oswald now that we need him?