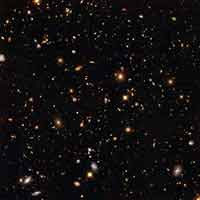 This is without a doubt the most humbling photograph I have ever seen. NASA aimed the Hubble telescope into what they thought was an empty part of space, a miniscule portion of the sky the width of a dime 75 feet away. What they found was

"a bewildering assortment of at least 1,500galaxies at various stages of evolution."

Every single light source in the photo is a galaxy…over 1,500 of them…captured by telescope in the barest sliver of the universe.

We are so small. We know so little.
Posted by Cheryl at 18:37 Recommend this Post