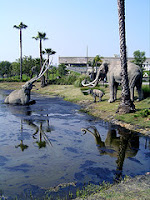 This could make your head explode.
Lawyers Guns and Money pulls some of the muck out of the wingnut mind and their "new" take on the media's so-called liberal bias.
Here, DJW expresses some understandable disbelief at the stretch attempted by Stanley Kurtz. Try this on to start:

Media coverage of Iraq has been biased, and that bias has indeed helped to shape events there for the worse. At the same time, conservative distrust of the media’s very real bias has inclined us to dismiss reports about problems in Iraq that are real.In the end, I think the media bears fundamental responsibility for this. Had they been less biased–had they reported acts of heroism and the many good things we have done in Iraq–I think conservatives would actually have taken their reporting of the problems in Iraq more seriously. In effect, the media’s consistent liberal bias discredits even its valid reports.

I told you your head might explode.
If you need more, Rob points out to Rich Lowry that the pessimism Rich addresses in the liberal media actually never occured and that the supposed pessimistic view of watershed events Lowry suggests was prevalent in media reporting actually never happened. In fact, the exact opposite was true.

I remember the killing of Zarqawi, and the capture of Hussein, and the deaths of Uday and Qusay, and the purple fingers, and toppling of the statue, and I remember that the media was deliriously enthusiastic about each. Perhaps the enthusiasm dampened as time went on, but it was bloody difficult at the time to find an assessment of Saddam's capture at a mainstream media outlet that wasn't blindly optimistic.

TBogg adds to the mix with a cutting analysis of the wingnutosphere's latest media conspiracy theory which would be funny if, as TBogg says, it weren't just sad.
After reading both LGM and TBogg you get the feeling that the wingnuttery is starting to get stuck in a quagmire of their own making.
Posted by Dave at 17:50 Recommend this Post