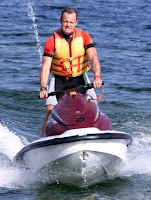 It appears Stockwell Day has had his blog expunged. Everything he wrote since becoming a cabinet minister suddenly disappeared.
That's bad.
Another problem is that when his columns appear in the Pentiction Western News, they too eventually fall into the abyss.
What to do, what to do? Apparently Stockwell, (or members of his political staff), are worried that Stockie's mouth (pen) could generate some embarrassment during, say, a future election campaign. So... they just delete everything they know doesn't represent the mindset of a majority of Canadians.
Except, Stockwell (and staff), Teh Internets aren't really a series of tubes. No, no, no. They're more like a bunch of dump trucks. You put stuff in, it moves, you try to toss it into a landfill, we dig it up and keep it!
Those of us who have a minor amount of knowledge know how to dig into an archive, even if you delete something, and save it. Why, did you know that Google caches almost everything that's ever been on a website or a blog?
So... we rescued a few of Stockwell's bestest columns and blog posts. They now reside in the concrete vault of The Galloping Beaver's Memory Hole. They will forever be available so that all may enjoy the written comedy of one of Canada's most memorable politicians.
Clicking on the picture gets you a little gift.
Posted by Dave at 13:17 Recommend this Post

Email ThisBlogThis!Share to TwitterShare to FacebookShare to Pinterest
Labels: conservatives sure are funny, morons, stockwell day