EVERYWHERE AND EVERYWHEN, people have tried to cope, tried to "get ahead", tried to prevail. Different times and different scenery produce different challenges and different perspectives from common-sense survival to the sophistry of delusional abstraction.

Venkatesh Rao, has a post on his RIBBONFARM site that is worthy of pondering, "The Evolution of the American Dream".

Just one word changed, and the new and old words both begin with b, bolstering the illusion of continuity and natural evolution.

Let’s call such a slowly shifting narrative, simple enough to be captured in a slogan, and designed to help a small predatory class dominate a larger prey class, a Pig Narrative. The American Dream is a Pig Narrative.

Venkatesh seems to have a point here. A Pig Narrative, indeed. But that's not the reason I'm posting this. The reason is that Venkatesh presents an interesting list of generations in the evolution of the U.S. as a country, below: 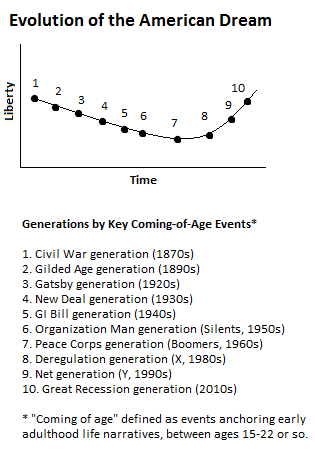 You can compare Pig Narratives on the basis of the degree of prey liberty (or conversely, predator control) they represent, allowing you to plot the evolution over time. If you plot the course of the American Dream through its many rewrites (9 so far by my count, each associated with a major coming-of-age event that defined a generation), you get something like the picture above.

Now, IMHO, this is where the perspectives become fascinating:

And so, are we approaching the closing stages of the Monopoly game?
Posted by Edstock at 10:47 Recommend this Post

Your post is very nice and informative it is very useful for music entertainment we are also work in this field and welcome you to visit our website.