If you haven't read Skippy... 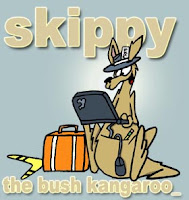 The Bush Kangaroo lately, well, now is a good time.

Because, as Jon Stewart says:

When I want news, I go to CNN. And they turn to Skippy, The Bush Kangaroo.


"I think the destructive, vicious, negative nature of much of the news media makes it harder to govern this country, harder to attract decent people to run for public office. And I am appalled that you would begin a presidential debate on a topic like that," he said.

I dunno, Skippy, whaddya think? Should Clinton get a chance to toss in a question here?
Posted by Dave at 22:56 Recommend this Post

i'm aghast that john edwards got run out of politics when newt is winning the primary on the very same behavior!

thx so much for the shout out!

also, mad props to jim yeager, my co-blogger who wrote the piece you linked to!