Gimme some of that ole time safety 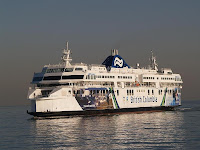 If you live in Moose Jaw (note: two words) you probably don't spend a lot of time thinking about BC Ferries. On the other hand, if you're planning on a vacation which involves world-class flower gardens or whales or even just a decent cup of tea, you're probably going to end up on a BC Ferry at some time. Anyway, your tax dollars, (Yup! Even federal ones), go into making that stretch of water a part of the Trans-Canada highway ... so you should care a little bit.

Back here there were links back to a couple sites which hauled up some information on BC Ferries and that more-than-inconvenient crash into the dock which, just before the Christmas/New Years rush, put Duke Point terminal out of business.

Now, I have always been a bit mystified by double-ended ships, particularly large ones like the Coastal Inspiration. I cut my teeth on twin-screw, stern propulsion systems, even if the first of them was a relic which required burning the furniture to maintain 16 knots. I have always preferred that both engines produce power out the stern for a variety of reasons. But, that's just me.

Vancouver journalist Chris Montgomery has done some serious digging into the possible causes of Coastal Inspiration's latest mishap and it is truly worth the read.

It brings to mind something an old Master once told me in my first passenger ship: If you're counting up redundant systems and you're still on the fingers of one hand, you probably don't have enough. (Although three layers of redundancy should work if you maintain regular practice).
Posted by Dave at 14:09 Recommend this Post

Email ThisBlogThis!Share to TwitterShare to FacebookShare to Pinterest
Labels: bc ferries, coastal inspiration

You know, I was thinking about this apparently non-redundant propulsion system as I was counting feathers on shorebirds sitting on pretty rocks and watching the current boils in Active Pass from 6 deck on the Coastals yesterday.

I'm no sailor but I imagine a mishap there with the current and rocks would not make for an orderly and survivable abandon ship for many passengers. Propulsion failure during a key manoeuvre: hull meets rock and peels open, current floods hull in seconds...ship lists and a a good many tonnes of cars and trucks then slide to one side further increasing list. It's all over before they can open the lifepreserver lockers.

If even half of Chris's, yours, and TS's thinking is on mark, BCF's penny-pinching borders on the criminal.

I have lived on a Gulf Island for over 20 years.
I resent the view of BC Ferries as a highway because I am resentful of all the traffic,
Sure we need to transport goods but we don't need all the personal automobiles, so we don't need these huge ferries. We need innovative foot passenger only ferries and the Canada Line extended to the ferry terminal,as well as light rail from Victoria to Schwartz Bay.
Visitors can rent a car at either terminal, if they think they need one.

FYI for Dave and readers:

Well done, Dave! On the spelling of Moose Jaw and the post. We do have a few ferries in SK, but they're very small and primarily run across rivers, after the ice breaks up, of course. ;)