Robbing seniors to pay the well-to-do 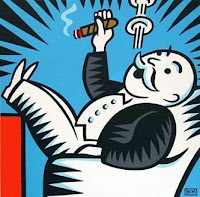 Greg nails it. The Harper agenda to carry out "pension reform" because the population of seniors in Canada threaten to undermine the economy is based solely on ideological propaganda and not an analysis of the facts.

For one thing, most of these PMO talking points are propaganda utilizing grade 4 arithmetic (at best):


OAS is funded primarily through taxes on working people and is unsustainable on its current course.

For example:
If we do nothing, OAS will eventually become too expensive and unsustainable.

Simplistic enough for some, (the group that would buy that line of tripe), but unsubstantiated with any statistical evidence. So, The Jurist engages in a statistical exercise which immediately puts the Harper PMO sputtering to the lie.


The Cons' estimated total cost is about $108 billion. But based on Statistics Canada's medium-case demographic estimates, seniors ages 65 and 66 will make up only 11.5% of the total population aged 65 and up as of 2031.

So if OAS is relatively evenly applied across the age spectrum, the savings from pushing back the retirement age for Canadians in general will amount to 11.5% of $108 billion - or just over $12 billion per year.

And then he takes aim at the real plan. The Harperites promised that, once they've balanced the budget, as long as you have a large enough income, you can increase the amount of money you put into a Tax-Free Savings account from the current $5,000 to $10,000 annually.


At the same time, the Cons plan to push through general income splitting and increases to tax-free savings accounts. And those plans - targeted squarely at large-single-income households and those wealthy enough to have $10,000 to sock away every single year - will cost...just under $12 billion per year. And unlike the Cons' numbers for OAS, that's without taking into account any growth in the size of the tax base in the meantime.

Just so we're clear here, the cost of the Harper frat-boys' plan to allow income splitting in high-earning-single-income households and to double the amount that those with a spare ten-thousand bucks laying around can shelter from interest and investment income taxes is about the same as would be saved by forcing seniors to delay an old age benefit until they reach aged 67.

The question is, how many wage-earning Canadians have an extra $10,000 laying around to toss into a tax-shelter? Not many, I reckon, so it would be a benefit acquired by a smaller percentage of the population than would be surrendering that same amount of needed survival income.

Is the fog coming off the mirror yet? The Harper plan for "prosperity" is to rob seniors of their past tax payments and give it to the wealthiest portion of the population.

And if you're a Harper Conservative, that's as it should be.

I figured the numbers didn't add up but thanks for doing my homework, Dave.

Those numbers are telling - 12 and 14% actually managing to maximize their RRSP contributions. I only know that when I was unemployed, I ended up cashing in what little I had in an RRSP to survive without having EI access. I am sure others might have done the same.

It's time for working people to recognize that they have been paying for these programs throughout their working lives and should not be made to sacrifice their investments just because some tinpot leader says that we have to practice austerity.

I certainly hope, Harper and his henchmen, will not get their gold plated pensions, until they are 67 either. Their salary's and their pensions, should have a 30% roll back.

Their outrageous salary's, are enough to pay for their own pensions, out of their own pockets. They should be paying for their own hospital care, surgeries, their own premiums,and out patient procedures and such.

They should not collect the OAS, nor should any of the wealthy.

Can you imagine, the squealing at the trough, if they had to pay their fair share?

There are very few politicians in Canada, that are worth the powder blow them to hell. They are just parasites, that are killing this country.

Any politicians who is honest, is soon done away with. You can ask, Gordon Campbell and Harper about that.