US Navy tangles with Somali pirates

No. It's still not Johnny Depp.

The coast of Somalia has been a constant source of grief for merchant mariners. Pirates have been making life miserable and there have been calls for increased naval patrols in the area. There is no Somali navy. In fact, there is no Somali government. The US 5th fleet, based in Bahrain, patrols the Indian Ocean and on January 22 the USS Churchill intercepted and captured one group of Somali pirates after responding to a piracy call from a merchant ship.

On Saturday the US Navy once again encountered pirates off the coast of Somalia, only this time things got a little stupid. 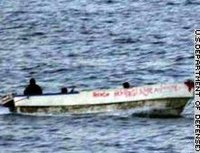 Took on this Ticonderoga class cruiser

and this Arleigh Burke class destroyer. 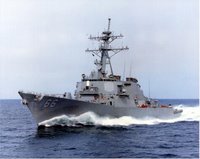 It was during a "routine boarding" of the suspected pirates' vessel that the naval boarding team noticed the crew was armed with what appeared to be rocket-propelled grenade launchers, said the Navy.

"The suspected pirates then opened fire on the Navy ships," a press release from the Navy stated. "The Cape St. George and Gonzalez returned fire with small arms in self-defense."

That would earn anybody a Darwin Award. Taking on a cruiser and destroyer is beyond dumb, but it should underscore how desperate these guys are. Somali pirates usually attack UN World Food Program ships and have recently kidnapped 50 Yemeni fishermen. They were also responsible for an attack on the cruise ship Seabourn Spirit last November 5th.

The US Navy won this one. According to reports, one pirate was killed and five were wounded.
Posted by Dave at 18:33 Recommend this Post