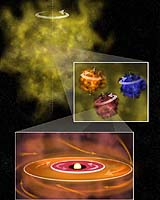 Astronomers have discovered yet another first. While studying a newly forming solar system in the Ophiuchus constellation, they realized that the gas and dust cloud surrounding a young star has unusual properties – the inner section of the cloud rotates in one direction, while the outer section rotates in the opposite direction. This means that when the cloud eventually forms planets, the planets of this solar system will have differing rotations. It’s a phenomenon never before seen or even heard of. It has always been thought that planets must rotate in the same direction as the dust cloud that they originated from. In our own solar system for example, all of the planets from Mercury out to Pluto march in the same direction.

The speculation is that this unusual protostellar disk is actually the combination of two dust clouds that rotate in opposite directions. So astronomers are now expanding their concepts regarding the planet-forming process.

Stick around for a few million years and we’ll see how things develop. I’ll give you an update in the year 4,002,006 AD.
Posted by Cheryl at 12:51 Recommend this Post