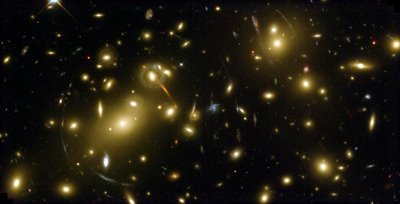 I'm fascinated by pictures of galaxies. It probably goes back to my first glimpse of the heavens in the brand new telescope Dave bought me (as a reward for surviving tax season) when we managed to zero in on the Andromeda galaxy. I was hooked.

This glorious picture, courtesy of NASA's Hubblesite, is of a cluster of galaxies two billion light years away. The galaxy cluster is so massive that its gravitational field deflects light rays passing through it, thereby acting as a lens that brightens and magnifies images. If you look closely, you can see "arcs" throughout the picture. These are ancient galaxies, formed during the early stages of the universe, that are 5 to 10 times further away than the galaxy cluster, visible due to the "zoom" effect caused by the gravitational lensing.

The colours in the image tell their own stories. Blue indicates young, hot stars; red shows cool, older stars; and the white/yellow colour is the result of the combined light of many stars.
Posted by Cheryl at 22:10 Recommend this Post