Queen Of The North Sinks Update

Global TV has reported that sources close to the Transportation Safety Board and BC Ferries have stated that Queen Of The North was on autopilot (gyro steering) at the time she collided with Gil Rock and things suddenly went terribly wrong.

The doomed B.C. Ferries vessel Queen of the North was on autopilot when it went off course and sank after striking Gil Island, sources told Global TV on Monday.

Being in autopilot is not illegal nor even bad practice, but there must be a means to switch to manual steering immediately. Three possibilities here:
1. The autopilot, which is fed information from various devices stopped receiving information and started to move the rudder wildly in either direction; or,
2. The ship was moved off course by wind, tide or both and the steering system was required to apply more than standard rudder in an attempt to re-acquire the dialled-in course. In this instance, with the gyro steering searching for its course, the ship could actually end up doing a complete circle before regaining its proper course; or,
3. The gyro, the primary device which feeds the automatic steering system, toppled and was no longer providing accurate information. If this happened, (and it's not uncommon), the compass heading would swing uncontrollably on the primary read-out and the automatic steering would follow it. In short, the gyro compass card would begin spinning slowly and if the ship's automatic steering was engaged, it would follow it thinking it was keeping an accurate course.

The two members of the bridge crew also failed to get the problem under control, said Global, citing sources close to the investigation and people who had spoken to crew members.

As odd as this is going to sound, switching from automatic steering to manual steering isn't as easy as just flipping a switch. However, there was at least one other option.

Global said the ferry was on autopilot as it neared Gil Island, where it was scheduled to make a turn.

An alarm sounded as it veered off course moments before the collision.

That triggered a cascading series of errors, one ferry official told Global. The key mistake was a failure to reduce speed, causing the ship to sail past it's turning point and plough into the rocks of Gil Island at 19 knots.

This is a personal thing, but I have never been happy being in automatic steering when I am that close to shoal ground. Given the nearness of Gil Island I would have ordered a shift to manual steering and used the helmsman to alter, thus the helmsman would have been steering well back in Grenville Channel.

The failure to reduce speed is a cardinal sin. Whenever a ship starts to have difficulty with steering the immediate response is to stop or slow engines in order to minimize the speed at which any future incident will occur. It's better to hit something at 2 knots than 19 knots.

As a matter of reference, if you look at the picture at the bottom of this post, once the officer of the watch realized that there was a problem and the course alteration would not occur, if the ship was one nautical mile from Gil Rock, it runs aground in about 3 minutes at 19 knots. If the speed was reduced, even accounting for the time to slow down (head reach), once slowed to a mean speed of 6 knots, that same mile takes 10 minutes to cover. That adds critical time to react and correct any problem.

The two crew members also failed to ask for help from other officers to cope with the off-course warning, sources told Global.

The officer of the watch, the person responsible for the ship at the time, should have immediately called the captain.

The Global report also points out that one of the three bridge staff was off the bridge having a meal. That's no big deal since there would always be a qualified watchkeeping officer on the bridge, but if it was one of the officers away eating, he/she should have been called back at the same time as a call went to the captain. 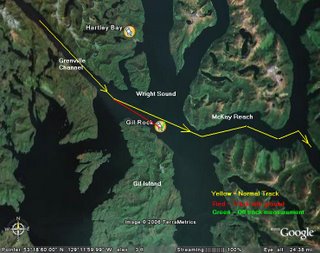