Queen Of The North Update

I have been receiving requests for any more detail on the Queen Of The North sinking March 22, 2005.

It now looks like there is a clear possibility that two people went down with the ship.

But there's every indication Gerald Foisy and Shirley Rosette, both of 100 Mile House, B.C., did board the vessel.
Foisy's brother, George Foisy, saw them off at the dock Tuesday evening, his last memory of them a digital image in his camera.
Hahn said B.C. Ferries contacted the couple's relatives to find out if they had found their own way out of Hartley Bay, which has no road and is accessible only by water and air.
RCMP were still checking Hartley Bay but Hahn said there's now no sign they were ever there.

These snapshots from Google Earth (TM) may give a bit of perspective: (Click on picture for a larger image) 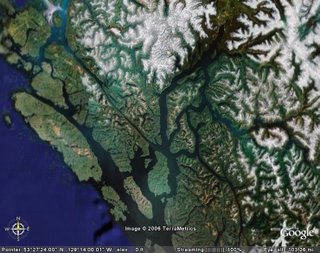 Grenville Channel, Douglas Channel centered on Wright Sound. The north end of Gil Island is the estimated point of impact. 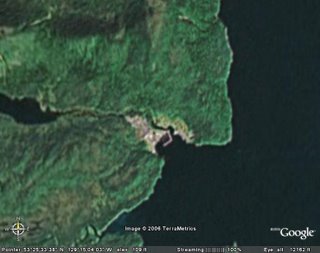 The village of Hartley Bay just beyond the entrance to Douglas Channel. 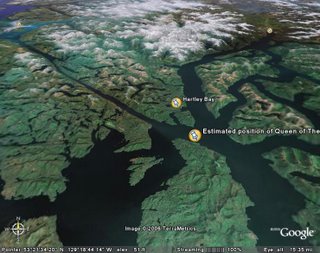 I did talk to another mariner last night about this. He told me that a deep sea cargo ship had been moving northbound earlier in the day and, if in fact it was proceeding to Kitimat or Prince Rupert, would have met the Queen Of The North at about the time of hitting the rock. It is possible that QOTN had made an earlier alteration to avoid traffic, although there is absolutely nothing to indicate so. I have doubts since no other ship was engaged in the rescue.

Some media reports are making something about the Captain not being on the bridge when the ship hit the rock. That isn't an issue here. There are several fully qualified bridge watchkeeping officers in a ship. The middle watch (midnight to 4 am) is usually stood by the 2nd or 3rd mate and that would be the standard practice in a ship this size.

What is interesting is that the watch may well have just changed over before the ship struck. We probably won't know that for some time to come, however, and everything is just speculation at this point. 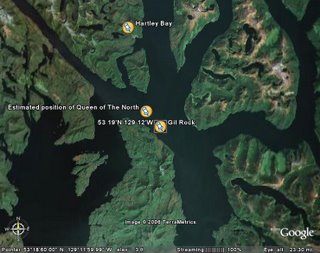 Update: After a discussion or two with other ship's masters we've pinned down where the Queen Of The North actually connected with the rock. I've put together another picture from Google Earth (tm) with the latitude and longitude of Gil Rock. (Click to enlarge)

What this tells us is that QOTN was WAYYYY off course. She should have turned to the north by altering to port well ahead of ever having reached that point. It also suggests that the Officer of the Watch did not have a handle on where he/she actually was.

This is pure speculation, but it seems to me the Officer of the Watch may have felt, by misreading the radar picture, that the ship was still much further back on its track and just exiting Grenville Channel.

Time (and an investigation) will tell.
Posted by Dave at 21:41 Recommend this Post