This is just in from CBC. Reports say that a Canadian soldier has been killed in Afghanistan during a fight with insurgents.

A Canadian soldier has been killed in a remote area outside of Kandahar, according to reports.

CBC's Keith Boag reported that Ottawa would only confirm there was an incident resulting in Canadian casualties in Kandahar. He said officials will not elaborate until the next of kin have been notified.
[...]
Separately, the Pentagon is reporting that one U.S soldier and one coalition soldier were killed and three coalition soldiers injured in a firefight with insurgents.

More information will be available soon.

Update: This is the update from CBC. 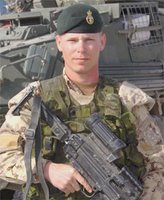 One Canadian soldier has been killed and three others injured during a firefight with Taliban insurgents in a remote area outside of Kandahar.

Canadians had been repositioned to the area in response to an earlier incident in which eight Afghan army soliders were killed.

A significant number of Taliban were killed during the battle, he said.

Earlier, the Pentagon confirmed that one U.S soldier was also killed in the attack.

A U.S. soldier and an Afghan National Army soldier were also wounded.

The injured soldiers were taken to a coalition medical facility in Kandahar for treatment.

The Pentagon also reported two other incidents in the same area. Five private security contractors will killed on the highway between Helmand and Kandahar and another incident involving one US and three Afghan army soldiers.
Posted by Dave at 21:45 Recommend this Post