Yesterday the death toll of British soldiers in the Iraq conflict reached 100 when 31 year old Corporal Gordon Pritchard of the Royal Scots Dragoon Guards, succumbed to wounds received during an attack on a re-supply convoy in Umm Qasr. The region had not suffered from the same level of Iraqi resistance as Baghdad or Basra. British forces had managed to establish good relations in the area.

There is concern that the insurgency is spreading into areas which were once considered secure. The day before Lance Corporal Alan Douglas was killed by enemy fire in Maysan province.

British troops are becoming increasingly disturbed by the poor progress in Iraq. In October last year concerns were raised by the British General Staff that troops may well have been reaching a breaking point. The British army, which tends to have more career soldiers and more consistent regimental affiliation than US forces have been rotating into the Iraq theatre at a slightly higher tempo than the US.

In October, during an interview, one NCO said:

"Mr Blair keeps on saying that everything is getting better here. Perhaps he would care to come and see for himself. He is pretty good at sending other peoples' sons to Iraq."

Whether that public comment was the impetus or not, British Prime Minister Tony Blair was prompted to visit Iraq in December 2005. During that visit he was photographed with Corporal Gordon Pritchard, Royal Scots Dragoon Guards, 7th Armoured Brigade. 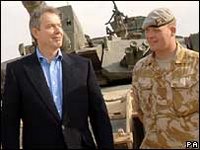 At least Blair knows the face of at least one soldier he sent off to die in Bush's disastrous adventure.

... Not tho' the soldier knew Someone had blunder'd:Their's not to make reply,Their's not to reason why,Their's but to do and die ... Afred Lord Tennyson
Posted by Dave at 19:25 Recommend this Post