CIA can neither confirm nor deny that they exist

You have to love it when the bizarre gets downright ridiculous. The Project On Government Oversight submitted a request to the CIA for a Mandatory Classification Review of the Iraqi Weapons Declaration on which the CIA reported to Congress:

On 7 December 2002, Iraq submitted a 12,200-page weapons declaration under United Nations Security Council Resolution 1441. In that declaration, Iraq still maintained that it possessed no WMD, including BW or CW. A full assessment or verification of that declaration was not completed by the end of 2002, but much of the declaration was a repeat of previous submissions, and in some instances disagreed with what UNMOVIC already knew.

OK, so we have a clear statement that the CIA is in possession of the Iraqi declaration which POGO is asking they review. 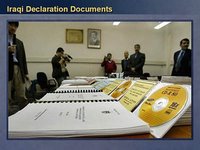 So, let's get this straight. The documents in this picture, which the CIA received by Iraqi hand delivery, in compliance with UN Security Council resolution 1441, are now so secret that the CIA refuses to acknowledge they exist. The added feature is that they claim to be protecting sources and methods. Do they mean Fedex or UPS?

The CIA's fellow travelers at the State Department don't seem to be quite so reticent:

This is to acknowledge receipt of your letter... concerning the Iraqi weapons declaration on chemical, biological and nuclear programs to the United Nations Security Council required under paragraph 3 of Security Council resolution 1441 delivered by Iraq in December 2002. Your request has been assigned case control #200505213.

The mind boggles.
Posted by Dave at 22:23 Recommend this Post