On the need to follow recipes exactly... and stuff 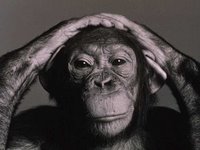 I do try to keep the culinary fare around here interesting by varying the meals I produce and adding a little flair. Sometimes that means altering the occasional recipe to liven it up a bit. That's alright if it's something relatively standard, like chicken. Following the recipe precisely isn't really all that necessary and any mistakes can be covered with a cup or so of rosemary. Other specialty dishes however, require the home chef to adhere closely to the recipe or more than a small gastronomic disaster can occur. This uniquely Canadian meal, (from Bert Christensen) for example, is one that I would follow to the letter, not because it can't be enhanced but because I just don't have the kitchen creativity to do it.

The idea that following recipes to get the required result got me to thinking about other things. I was taking a prescription medication and noticed that the instructions were to take one of the little pills daily... by mouth. So, where did they think I was going to take it?

I know I shouldn't ask, particularly since I was once witness to one of my men foaming at the mouth after making an attempt to swallow a bullet-shaped Panadol. He was fine, but he spent the next hour brushing his teeth. That can create its own problem since I know a friend who, half-asleep and in the dark, tried brushing his teeth with something I'm pretty certain did not say TAKE BY MOUTH.

I suppose that goes to actually reading the instructions, although I have often wondered about those little silica-gel packages with the warning DO NOT EAT. That makes sense, I guess, but I have always been curious as to what type of person would think they're getting a little snack with a new DVD player.

Of course, following instructions provided by others isn't always necessary. I do like to create my own woodworking projects. I prefer things that are rectangular. For example, the kitchen now has an amazingly skookum potato box. What makes it truly amazing is that the original project started as a lamp. It's the fun of woodworking and the mark of a true amateur craftsman to be able to take a project which is nearing completion and totally alter it to meet a more pressing need.

I probably wouldn't have said much on this subject except that I actually came across a site that provides a set of instructions on how to follow instructions.

I know. Your head wants to explode.
Posted by Dave at 21:42 Recommend this Post