Eddie is spitting into the wind again

The call centre manager over at The Steering Gear Compartment has been drinking rancid cherry cola again.

In his latest weigh-in on the Canadian election he points out that Harper has now “crossed over into a majority”. He bases his information on the latest Ipsos-Reid/Canwest Global poll.

There is no dispute with the numbers Mr. Ed copied from the Ipsos news centre. It’s what he’s interpreting and what he’s suggesting they represent. Harper hasn’t really done anything yet, although there was major disapproval expressed for Harper’s cabinet appointments, (something Ed seems willing to dismiss).

What is really off the mark though is this unbelievable piece of tripe:

He has a mandate for moving forward. In fact, he may have the most well-supported federal government in recent Canadian history.

Ummm… no. Harper has nothing like a mandate. Repeat after me: the-weakest-minority-government-in-Canadian-history. And, for what it’s worth, those poll results suck considering Harper’s fingerprints are still on the GG’s bible and he has yet to take his seat in an open Parliament. Most new PMs poll much higher in the first few weeks of assuming office.

You could look at this poll by Pollara conducted for the Canadian Institute of International Affairs and released yesterday, and make it look like magic too, but since the focus of the poll has done exactly zero in any one of the categories surveyed, the 2,317 people are guessing. That’s not confidence: it’s hope. It’s also skewed since Harper only polls above 50 percent in two of nine categories. And if you want to really squeeze out an interesting result it is that Harper is expected to improve relations with the USA at the cost of Canada’s sovereignty. (That actually happening would prompt ordinary seaman Eddie to reach for the Kleenex, I’m sure.) 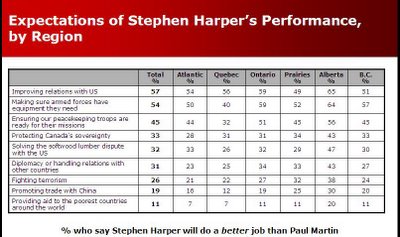 But, none of that matters. Harper has yet to actually govern. Everything he’s done up to now is nuts and bolts. Wait until the Throne Speech and a budget come down, then take a poll. If his numbers stay where they are now, you can bet at least one province will plummet and dozens of right-wing cowboy hats will be stomped into the dinosaur bones.

A much more balanced interpretation of the numbers is here and doesn’t contain Morrissey’s wingnut hype.
Posted by Dave at 15:29 Recommend this Post